Coronavirus: How Tesla fell in line after days-long duel with authorities 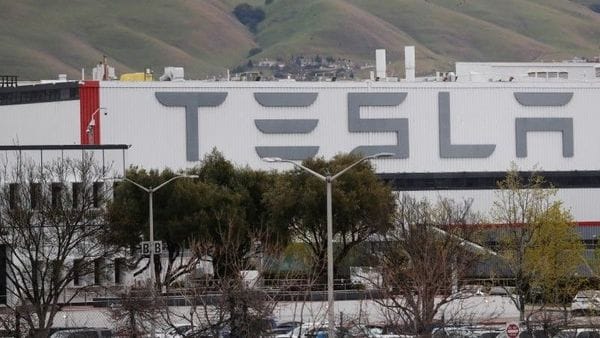 The view of Tesla vehicle factory which is open for business, despite an order by the Alameda county's sheriff's office to comply with a three-week lockdown in the San Francisco Bay Area, in order to rein in the spread of coronavirus disease.

Tesla Inc. will idle production at its lone U.S. assembly plant, choking off the supply of cars to customers as the quarter comes to a close.

The decision announced in a statement Thursday followed several days of public pressure on Tesla by local police, city managers and health officials about the carmaker continuing to run the factory despite a county shelter-in-place order. Tesla said the facility will stop production at the end of March 23.

“Despite taking all known health precautions, continued operations in certain locations has caused challenges for our employees, their families and our suppliers," Tesla said in the statement.

Tesla shares fell as much as 9.7% in late trading. The stock had rebounded during the regular session after plunging 44% over the course of the prior six trading days.

Last month, Tesla took advantage of its then-soaring stock by raising $2.3 billion in an equity offering. That sum, combined with the $6.3 billion cash that was on the balance sheet at the end of last year, “is sufficient to successfully navigate an extended period of uncertainty," the company said.

Tesla’s solar plant in Buffalo, New York, also will suspend production. Hourly employees at both factories will receive their normal pay through Monday, and then the company will provide paid leave while operations are suspended, according to an internal email.

“It’s the right thing for Tesla to do. They should have done this sooner," Gene Munster, managing partner of Loup Ventures, said by phone. “Tesla will survive."