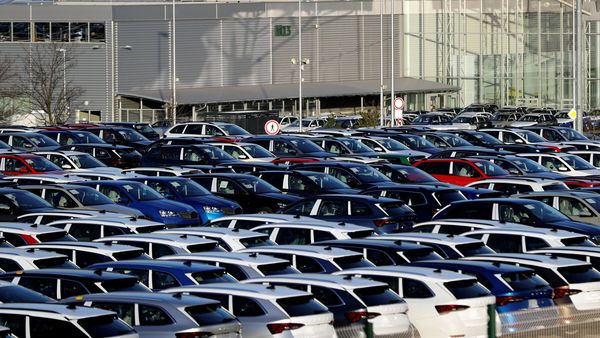 General Motors Co. and Fiat Chrysler Automobiles NV gave an early glimpse of the damage a global pandemic has done to their U.S. sales, reporting deliveries that fell short of analysts’ estimates.

Sales fell 7.1% for GM and more than 10% for Fiat Chrysler in the first three months of the year, both bigger declines than expected. While neither company provided a breakdown by month, demand by all accounts collapsed midway through March. Brands including Volkswagen, Honda, Hyundai and Mazda reported drops of more than 40% for the month.

The coronavirus pandemic has devastated an industry that just a few weeks ago looked poised to benefit from another year of healthy consumer confidence, cheap financing and a strong labor market in the U.S. Analysts are now all over the map in issuing estimates for how low sales will go, with virtually no one expecting a speedy recovery. China is recovering slowly from its bout with the virus, while Europe is preparing for the worst.

Toyota Motor Corp.’s U.S. sales sank 37% in March as many of its showrooms were shuttered. The downdraft spared no models, with deliveries of its best-selling RAV4 compact SUV dropping 25% last month.

Nissan Motor Co., whose sales woes predate the spread of the virus, had the weakest first-quarter showing among major manufacturers, posting a 30% plunge in deliveries. An aging product lineup and managerial instability has weighed on the company for more than a year. Now, more than a quarter of the company’s 1,075 U.S. dealers are affected by state ordinances limiting their sales operations.

(Also read: Automakers are about to give an inkling of the sales collapse ahead)

“We obviously saw quite a big tail-off in business," David Kershaw, division vice president of the Nissan brand in North America, said by phone. “We’re feeling it in arguably one of our best regions, which is the northeast. They are obviously significantly impacted."

Honda Motor Co. rounded out the three largest Japanese automakers with a 48% plunge in March. Combined sales of its namesake and Acura brands dropped 19% for the quarter.

Analysts on average were estimating the annualized light-vehicle sales rate would slow to 11.2 million in March. The industry pace last fell below 12 million in 2011, when a tsunami wiped out production of cars and parts in Japan for months and disrupted the global auto supply chain.

An industry-wide shutdown of factories that began in the middle of March is now going to last longer than companies including Ford had initially hoped after President Donald Trump extended to April 30 the social-distancing guidelines aimed at containing the virus. With a global recession increasingly likely, U.S. consumers are expected to be less interested in making big-ticket purchases like new vehicles even once they’re able to leave their homes.

In addition to trouble on the retail front, rental-car companies are paring back vehicle purchases as they seek to be included in the federal government’s rescue of travel-related companies including airlines. Hertz Global Holdings Inc. and Avis Budget Group Inc.’s moves to slash expenses and shrink their supply of cars may mean sales to fleets fall even further than deliveries to consumers.

While brands including Chevrolet and Kia are offering 0% financing deals to entice wary shoppers, they’re failing to get buyers to bite so far, market researcher Edmunds said Wednesday.

“Automakers reacted quickly to the coronavirus crisis with attractive incentive offers and payment programs, but these unfortunately appear to fall on deaf ears," said Jessica Caldwell, executive director of insights at Edmunds. “Consumers were understandably distracted by the rapidly changing news cycle and changes to everyday life."