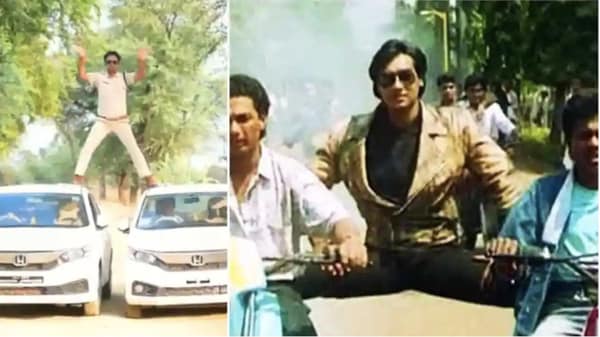 ₹5,000 fine was slapped against Manoj Yadav, the SHO of Narsinghgarh in Damoh district of Madhya Pradesh, for this stunt copying Bollywood actor Ajay Devgn.

A sub inspector of Madhya Pradesh Police has been penalised for recreating Ajay Devgn's "Phool Aur Kante" stunt with two cars. His video performing the stunt has gone viral on social media.

Sub inspector Manoj Yadav has reportedly been fined ₹5,000 and given a warning for his behaviour. Yadav is in charge of Narsinghgarh police station in Madhya Pradesh's Damoh district.

In the video, which has gone viral on social media, the sub inspector can be seen standing with two feet on top of two cars that are moving very slowly. This is exactly what Ajay Devgn did in his 1991 debut flick "Phool Aur Kante" with two bikes. The scene marked his entry in the film.

The cop is in uniform, and he wears a pair of trendy shades, reminiscent of Ajay Devgn's tough cop avatar in the movie "Singham". The title track of the film "Singham" plays in the background while the SI can be seen performing the stunt! He can also be seen waving his hand and throwing a flying kiss in the air just as Ajay Devgn did in the "Phool Aur Kante" scene!

As per reports, an enquiry has been initiated into the matter while the cop has already been fined and warned for his behaviour which might encourage youngsters to try such dangerous stunts.

Devgn likes to recreate the stunt in his films, and has notably done so in "Son Of Sardaar" on two horses, and in "Golmaal Again" on a pair of cars.