Tesla resumed production in April after three long weeks of pause and shipped only 1,512 vehicles from its Shanghai gigafactory in April.
By : HT Auto Desk
| Updated on: 31 May 2022, 11:46 AM 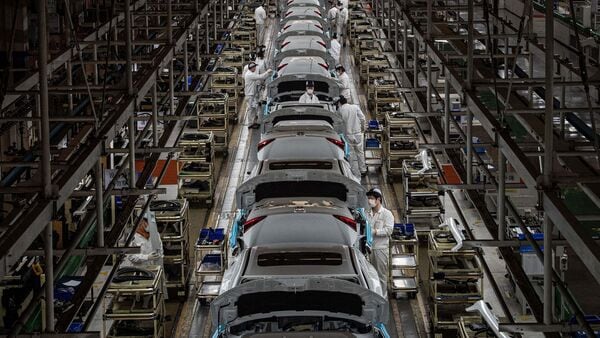 Shanghai's strict two-month lockdown and temporary restrictions imposed on cities - from Beijing to Tianjin - may have affected consumers' confidence in the market and country's economy seems to have taken a punch. According to a Bloomberg report, not a single car was purchased in April in Shanghai which may be a direct fallout of lockdown restrictions. The previously positive outlook for electric vehicles here is now under a cloud of doubt.

At the beginning of this year, the China Passenger Car Association predicted that the country may see sales of 5.5 million electric vehicles compared to the 3.3 million it registered last year. Even if the demand kicks back, various automakers are struggling to operate their manufacturing unit at full capacity as Covid-19 restrictions are still in place in varied work systems. Adding to the top of the already strained production process are the supply chain constraints.

Tesla, which resumed production in April after three long weeks of pause, shipped only 1,512 vehicles from its Shanghai gigafactory in April. Currently, Tesla is following a closed-loop setup in their factory in which workers will be quarantined in the vacant buildings and a military camp around the gigafactory. Tesla has also started two shifts and is pushing to produce 2,100 electric vehicles a day.

Deliveries from local automakers like Xpeng and Li Auto have also taken a plunge as deliveries of the former dipped by 42 per cent in April from March while the latter shipped 4,167 vehicles in April.

Auto analyst Jing Yang from Fitch’s China shared the firm might have to revise the forecast of almost 50 per cent growth in delivery of electric vehicles after the government's next move become clearer. Earlier this year, China also stated that it wants to encourage consumers to go for light, small-sized and low-emission conventional passenger vehicles in the country to achieve its carbon neutrality goals.