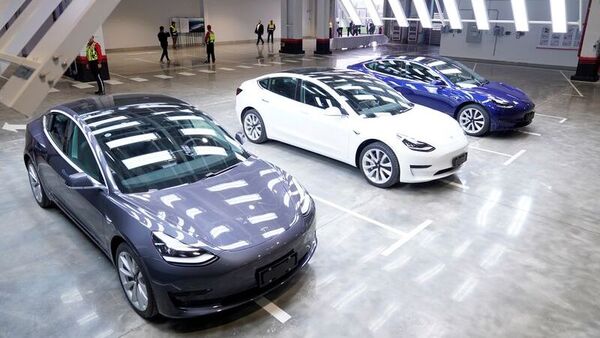 Tesla China-made Model 3 vehicles are seen during a delivery event at its factory in Shanghai,.

Shares of Tesla Inc. took a dive once again on Tuesday even as the electric vehicle maker continued to struggle with getting production at its China facility back to any semblance of normalcy. The Tesla Shanghai facility has been struggling with its production schedules due to lockdown restrictions here amid rising Covid-19 cases. The facility is one of the biggest for Tesla anywhere in the world and serves as a base which serves not just the Chinese market but units from here are shipped to several European countries as well.

Tesla share prices in the past have seen rapid rise but the going has been mighty tough in recent times. It was priced at $1,145 on April 4, the date CEO Elon Musk announced plans of buying a 9.2% stake in Twitter. Since the announcement, Tesla share price has fallen by 42% and is currently at its lowest ever. But while Musk's bid for Twitter have worried Tesla investors, there are other factors at play as well.

Looking at ramping up production and delivery capacities across the world, Tesla has found the going tougher than it may have initially predicted. The going at the Shanghai facility has been anything but a walk in the park with local authorities putting the city under severe restrictions. Even now, workers at the facility are in a bio bubble and multiple shifts have seen workers reportedly sleeping on the factory floors. Targets to take production back to pre-lockdown levels have been, well, pushed back.

The chip shortage crisis plaguing the automotive industry at large has also had a bearing on Tesla. For now though, Tesla plans to take the output to 2,600 units each day from the Shanghai plant but whether this bolsters confidence in the company remains to be seen.