China introduced EV subsidies a decade ago and they played a key role in turning the country into the top market globally.
By : Bloomberg
| Updated on: 20 Feb 2020, 04:33 PM 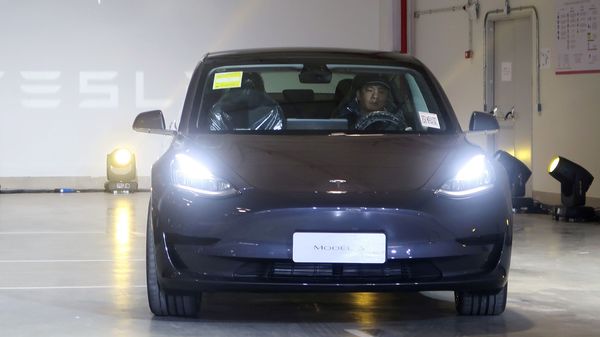 FILE PHOTO: A China-made Tesla Model 3 vehicle is seen at a delivery ceremony at the Shanghai Gigafactory of the U.S. electric car maker in Shanghai.

China may extend subsidies for electric-vehicle purchases beyond this year in an effort to revive sales in the world’s biggest market, people familiar with the matter said.

Policy makers have been discussing the possibility after China’s first annual decline in sales of new energy vehicles, according to the people, who asked not to be identified because the talks are private. The fall-off in demand came after the government trimmed subsidies for buyers last July to help streamline the industry and make it less reliant on state support. Though the talks predate the emergence of the coronavirus as a global threat, the outbreak has piled more pressure on the auto industry by causing production halts and keeping people away from showrooms.

Talks are at a preliminary stage and there is no guarantee the subsidies will be extended, the people said. As things stand, they are still set to be phased out at the end of 2020.

Prolonging the handouts would be beneficial to local EV makers such as BYD Co., BAIC BluePark New Energy Technology Co. and NIO Inc. as well as the likes of Tesla Inc., which last month started deliveries from its new Shanghai factory, its first outside the U.S.

Sales of new energy vehicles including electric cars, plug-in hybrids and fuel-cell cars tumbled 54% in January from a year earlier and the wider auto market also shrank, according to China Association of Automobile Manufacturers. Those figures were largely before the coronavirus outbreak took hold and led to city-wide lockdowns and production halts.

China introduced EV subsidies a decade ago and they played a key role in turning the country into the top market globally. They initially lopped as much as 60,000 yuan ($8,700) from a vehicle’s price tag, not including any extra sometimes provided by municipal governments. Subsidies now lower a vehicle’s cost by as much as 25,000 yuan, depending on the driving range.

The government set a timetable about four years ago to phase out subsidies by the end of this year. It also introduced a credit system that essentially required all carmakers -- international and domestic -- to produce at least some EVs. NEV sales accounted for about 8% of Zhejiang Geely Holding Group Co.’s total last year.

It is unclear when the subsidies will be rolled back if they are extended beyond this year, the people said. The Ministry of Industry and Information Technology didn’t respond to a fax seeking comment, instead referring to remarks by Minister Miao Wei last month, when he said the government will study and review the policy. He didn’t elaborate. The National Development and Reform Commission, China’s top economic planner, referred queries to the Ministry of Finance, which didn’t immediately respond to a request for comment.

The coronavirus has exacerbated the most severe downturn on record for EVs in China, which in turn has dragged down the global market as the country accounts for about half of the world’s annual sales of more than 2 million units. China Passenger Car Association said people are also shunning vehicle-sharing services, which is undermining demand from car-hailing providers, major users of EVs. Sales data will likely only turn more grim as the impact of the outbreak is more fully reflected this month.