The driver of the car sustained minor injuries after the accident. However, the car reportedly was heavily damaged.
By : HT Auto Desk
| Updated on: 19 Nov 2020, 02:44 PM 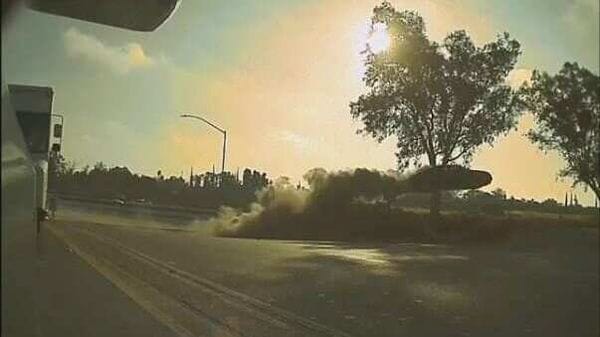 Photo courtesy: Screengrab of a video posted on YouTube by CBS Sacramento

Driver of a car sped off a highway in California after which the sedan went airborne for some time before landing on the ground.

The incident was recorded in a side-view mirror camera of a vehicle that was parked in the area. The accident took place at California's Highway 99 near the Kansas Avenue exit, as reported by a local news outlet.

In the video, the sedan can be seen speeding off the northbound side of the highway's freeway. It then hits a dirt embankment before going out of control and ultimately flying in the air. The car leaves behind a huge cloud of dust as it goes airborne, making it look like a chase sequence of a movie. It then lands on the ground with a thud.

As per the California Highway Patrol, the incident took place because the driver of the car was apparently not paying attention which resulted in the car losing control on the highway.

Even after the dramatic crash, the driver sustained minor injuries. The car is, however, speculated to have sustained serious damages.