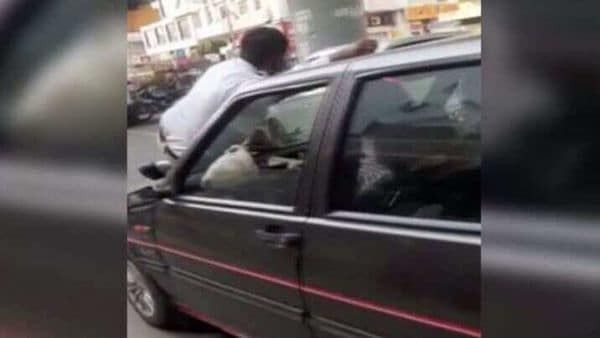 This screengrab from a video shows a traffic cop precariously hanging on to the bonnet of a car after the driver refused to stop for checking. (ANI)

An on-duty traffic police personnel was dragged on the bonnet of a car in Pimpri-Chinchwad, Pune after he attempted to stop the vehicle when he spotted the people inside without masks.

The driver of the car has been arrested as he tried to evade a fine for not wearing a mask.

The cop had to hang on the bonnet of the car, driven by a man who continued driving till he was forced to stop by some two-wheeler drivers who were chasing the vehicle.

#WATCH | Pune: An on-duty Traffic Police personnel was dragged on the bonnet of a car in Pimpri-Chinchwad after he attempted to stop the vehicle.
The driver of the car has been arrested. #Maharashtra (5.11) pic.twitter.com/W8pQb2B4Go

As per the complaint registered with Chinchwad Police Station, traffic police in the area were on their duty. They were checking for the people in their vehicles, who were not wearing masks.

Abasaheb Sawant, the police personnel working with the traffic division of Pimpri Chinchwad Police has suffered an injury on his leg. A case has been registered with Chinchwad Police Station under Section 307, 353, 323, 279 and 24(a), 177 of the Motor Vehicle Act.

The accused has been identified as Yuvraj Hanuvate (49).