Police have filed a case against a Delhi tourist who was recently caught on camera recklessly driving a Hyundai Creta SUV on the much popular Goa's Anjuna beach.
By : HT Auto Desk
| Updated on: 18 Jun 2022, 09:49 AM 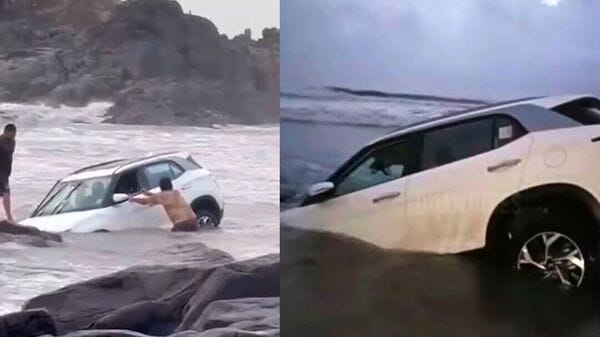 The SUV can be seen stuck in sand on the Goa beach.

Police have filed a case against a Delhi tourist who was recently caught on camera recklessly driving a Hyundai Creta SUV on the much popular Anjuna beach in Goa. The case has been filed by the Police on Thursday, as per an official.

Deputy Superintendent of Police Jivba Dalvi told PTI that Lalit Kumar Dayal, a resident of Delhi's Mangolpuri area, was booked for driving the SUV dangerously on the Goa beach. The car was rented from a local resident, however, the images and clips that went viral on the internet don't show the vehicle bearing a yellow plate which has been designated specifically for commercial taxis or rented vehicles.

Internet videos also show that the vehicle which was being driven rashly on the beach later got stuck in the sand. Dalvi added that the case has been filed against the accused under sections 279 (rash driving or riding on a public way) and 336 (act endangering life or personal safety of others) of the Indian Penal Code and the Anjuna police station Inspector Vikram Naik has registered the case.

The car owner, Sangeeta Gavadalkar, has also come under the radar for giving her private vehicle for rent to the accused and the police have also submitted a report against the car owner.

Driving on beaches in Goa is banned for obvious reasons and also the authorities close down the beaches to avoid any mishaps. However, similar incidents have come to light in the past where tourists flouted these bans and later got into trouble.