Home Auto News Canadians Are Being Warned About Car Licking Animals. Here's Why

Canadians are being warned about car-licking animals. Here's why

Images and videos of sign boards reading - Do not let moose lick your car - have gone viral on social media.Moose are animals that like the taste of road salt which can easily be found in the body panels of cars.
By : HT Auto Desk
| Updated on: 18 Nov 2020, 12:23 PM 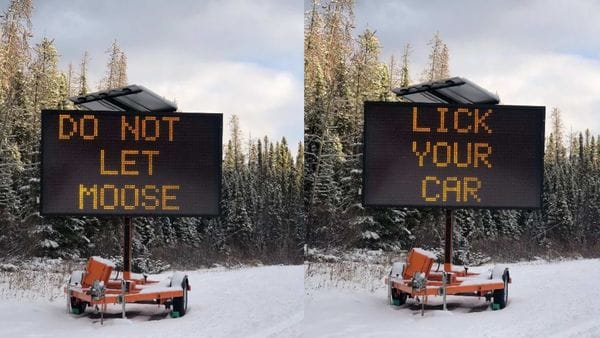 People in Canada's Alberta province are being warned to not let moose lick their cars. Moose are animals that belong to the deer subfamily and like the taste of road salt which are commonly found on the body panels of cars.

Images and videos of sign boards reading 'Do not let moose lick your car' have gone viral on social media. These sign boards were spotted along Maligne Lake Road in Jasper, Alberta, Canada, as per Snopes.

Moose, frequently seen in Canada during winters, can get dangerously close to cars to get a taste of salt that is accessible from the front bumper of vehicles that are parked around national parks.

A similar moose warning was issued in the area in 2016 where parks in Alberta cautioned visitors to not let these animals lick their cars, Snopes reported. The warning had strategies to deter moose from licking cars such as honking the vehicle. The warning also asked people to avoid pushing the animal away from the vehicles for safety reasons.

A spokesman from Jasper National Park was quoted as saying by a local news outlet that the car-licking incidents started as an occasional issue a few years ago and now is too common. "People are getting far too close, and it’s perpetuated by the moose’s obsession with salt, accessing the vehicles," he added.