Did you know that an estimated eight of ten car crashes with animals in Australia involve kangaroos.While swerving is the natural precautionary instinct, it may lead to more severe damage.
By : HT Auto Desk
| Written By : Shubhodeep Chakravarty
| Updated on: 22 Jun 2020, 04:12 PM 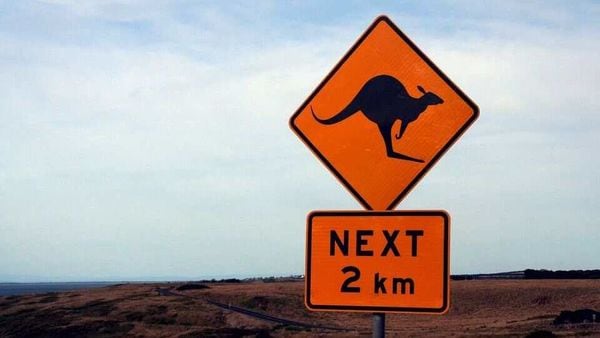 Warning signs like these are quite common on Australian roads and ask drivers to be more alert. (File photo)

As more and more Australians hit the road in their vehicles after exercising caution and maintaining social distancing to prevent the spread of Covid-19, instances of road kills have seen an uptick in many parts of the country. And it is reported that in most cases of hit and run involving animals, kangaroos are involved in large numbers. This has prompted several local authorities in the country to issue tips on how to avoid an animal collision or at least reduce the intensity of the impact to avoid fatalities behind the wheel or on the road.

According to a report in drive.com.au which quotes data from Australian Road Safety Foundation, eight out of ten incidents of car collisions with animals here involve kangaroos. An official from the foundation recommends that drivers should try their best to not swerve their vehicles if they spot an animal in close proximity. "It may seem natural to swerve to try to avoid an animal – and of course, none of us want to hurt an animal – but you could end up endangering yourself or someone else by skidding out of control or steering into the path of another car," Russell White was quoted as saying. "By all means brake heavily in a straight line to minimise impact, but don’t swerve in case you lose control of the car or steer into the path of oncoming traffic, which could have fatal consequences."

Swerving a car may be the natural instinct of any driver in the face of a sudden and imminent collision but experts often highlight how this act alone can amplify the degree of a road accident, whether it involves an animal or not.

In Australia in particular, drivers on highways often have to account for the sudden appearance of animals, apart from all other road hazards that are common the world over. Many say that the unpredictable nature of an animal puts the onus on a car driver to not only protect himself/herself and the car but the animal too.

Apart from kangaroos, data from motor insurance companies Down Under also reveal that collisions with wombats, dogs, deer and cattle are commonly - and unfortunately reported. And because most of such incidents happen either during dusk or dawn, people have often been urged to avoid driving during these times - especially in areas known for animal crossings or sightings.