UK may draft army personnel to deliver automotive fuel as the country witnesses a big supply-related roadblock which has led to motorists lining up for kilometres just for a refill.
By : HT Auto Desk
| Updated on: 27 Sep 2021, 10:36 AM 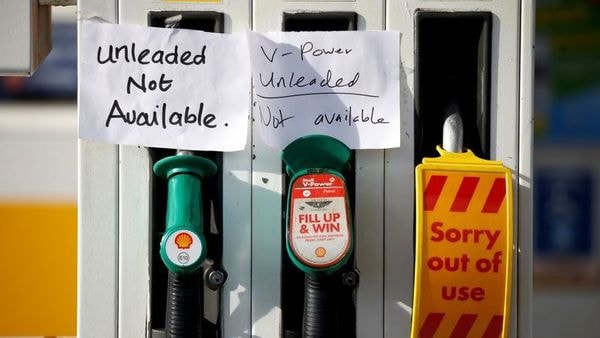 Hand-written signs are stuck to a petrol pump with no fuel available at a Shell filling station in Manchester.

Imagine going to a petrol pump and finding a uniformed trooper ensuring your vehicle gets a refill. Sounds outlandish? But that may well be what unfolds at fuel stations across the UK as a massive supply-related issue has resulted in a mammoth shortage of automotive fuel, leaving motorists queuing up for hours for just a tank full.

(Also read: UK may have law against driving on low fuel. And fine may be hefty)

Unprecedented scenes have unfolded over the weekend at fuel stations across the UK with a nearly-crippling shortage in fuel supply leaving motorists lining up for kilometres. Tempers have been running high as well with incidents of brawls being reported by the country's media. While there is no shortage of petrol and diesel as such, the issue has to do with transporting the fuel to pumping stations. There just aren't enough truck drivers, apparently.

While many officials here claim that panic buying has compounded the problem at hand, UK's Daily Mail reported on Monday that Prime Minister Boris Johnson may even bring in troops to ensure continued supply. Quoting sources in the government, the report claims that if the current trend of panic buying continues, army personnel may be tasked with transporting fuel to stations across the country. It is learnt that the process of figuring out how many troops with appropriate driving license can be deputed for this task.

Another option being reportedly considered is bringing in heavy vehicle drivers from foreign shores to tide over the current problem. 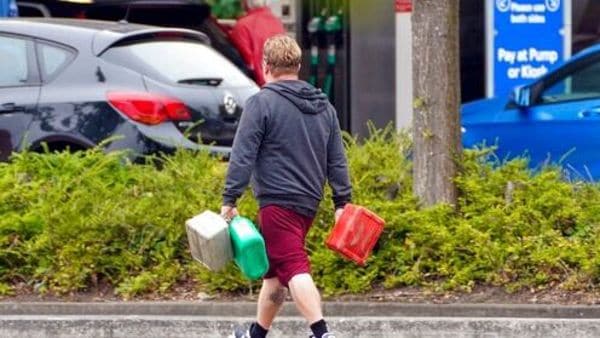 A motorists makes his way on foot to get fuel in canisters. (AP)

Either way, the problem itself has thrown life of motorists out of gear. There have been massive traffic snarls reported from many parts with people looking at alternate, possibly shorter, routes to reach destinations without using up too much fuel. People are also seen pouring petrol or diesel into large canisters for emergency purposes. Meanwhile, British Petroleum stating that nearly a third of its UK fuel stations are empty isn't helping matters either. ""With the intense demand seen over the past two days, we estimate that around 30% of sites in this network do not currently have either of the main grades of fuel," the company said in an official statement, as per Reuters.