Booths to time your journey on Yamuna Expressway, penalty for reaching early

Yamuna Expressway has seen thousands of accidents since it was opened for public use in 2021. Speeding is a very common offense despite speed cameras at various points.
By : HT Auto Desk
| Updated on: 08 Jul 2021, 12:53 PM 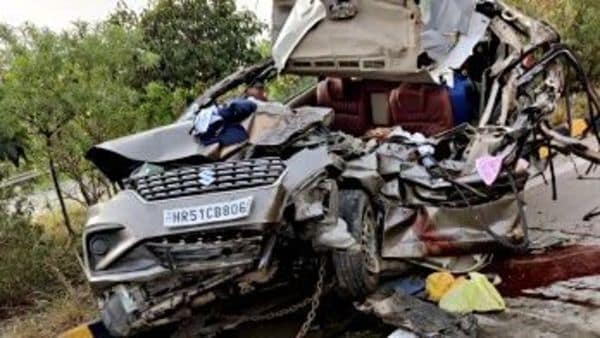 File photo of the remains of a car after being involved in an accident on Yamuna Expressway. (ANI photo)

Yamuna Expressway is an easy and quick way to travel between Delhi and Agra but since its inauguration back in 2012, the around 166-km stretch has also witnessed several very unfortunate - some tragic - accidents. In yet another bid to ensure motorists on Yamuna Expressway follow the prescribed speed limit, authorities are now reportedly planning to install time booths between certain points to check the duration each vehicle takes to cover the distance between these booths.

According to a recent report in Live Hindustan, the Yamuna Authority plans to install time booths at zero points on both sides of the expressway from Greater Noida and Agra. The time that a vehicle takes to cover the distance between the booths will be monitored and if a vehicle takes less than the stipulated time for it, the driver will be penalized. This is one more way - apart from speed-monitoring cameras - to check on vehicles moving at well over triple-digit speeds. "Work is being done to boost safety measures on Yamuna Expressway. Whatever is better will be done," Arun Vir Singh, CEO of Yamuna Expressway Industrial Development Authority (YEIDA), was quoted as saying.

Singh also pointed to other measures being taken up to prevent accidents. These include installation of crash beam barriers. These seek to prevent a vehicle from entering the opposite lane in case of an accident.

At present, light vehicles are allowed to move at speeds no greater than 100 kmph through the entire course of Yamuna Expressway. But despite several warning signs and the speed cams, many continue to drive at well over the mark. Offenders are penalized through digital means.

Thousands of accidents have taken place on Yamuna Expressway over past several years and it has caused hundreds of deaths. The otherwise smooth and convienent stretch becmes especially treacherous during foggy winter months but experts mostly agree that a large number of accidents in these times occur because motorists fail to take proper precautions.