Indian Railways loaded 108 Mahindra tractors from Maharashtra's Nagpur and will unload them at Benapole in Bangladesh.On the previous day, 87 Mahindra Bolero pick-up vans were loaded by railways for the same destination in Bangladesh.
By : HT Auto Desk
| Updated on: 27 Oct 2020, 17:19 PM 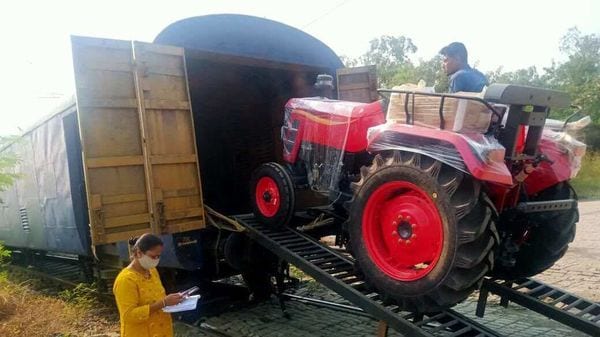 A Mahindra tractor being driven into a railway carriage. (Photo courtesy: Twitter handle of Piyush Goyal)

Another day, another rake of Mahindra vehicles being transported to Bangladesh by Indian Railways. Mahindra Group Chairman Anand Mahindra has once again taken to Twitter to thank the country's rail department and Railway Minister Piyush Goyal, this time for their efforts of transporting Mahindra tractors.

The tractors were loaded from Maharashtra's Nagpur and are destined to reach Benapole in Bangladesh. "I have to thank Indian Railways once again. At this rate I’ll be thanking you on a daily basis," Mahindra wrote on Twitter. This comes after he thanked Indian Railways for transporting the company's Bolero pick-up vans to Bangladesh the previous day.

Goyal shared images on Twitter showing Mahindra tractors being driven into railway carriages and informed that a total of 108 units were loaded. He stressed on how railways is boosting the export of automobiles from the country. "By offering safe, economical, swift & convenient logistics, Railways has emerged as a preferred mode of freight transportation," he wrote.

And now it’s our Tractors to Benapole. (Unfortunately not alliterative like Boleros to Benapole in Bangladesh!) I have to thank Indian Railways once again. At this rate I’ll be thanking you on a daily basis @PiyushGoyal ! 😊 https://t.co/N0WJvSm3ab

Vehicle manufacturers such as Kia Motors, Maruti Suzuki and Hyundai also depend on Indian Railways for transporting products from one part of the country to another. The rail mode reduces carbon emissions, is reliable, swift and cost effective. This is also aided by the new design developed by Indian Railways for increasing capacity of trains ferrying cars. The previous capacity to handle 125 cars was more than doubled to 265 cars using the double decker rakes before being further developed to now transport 318 cars at speeds of 95 kmph.

From April to September this year, the railways loaded 836 rakes of automobiles as against 731 rakes in the previous year. Recently, a fresh batch of Kia Seltos and Sonet SUVs was also spotted being transported via railways.