Anand Mahindra thanks Indian Railways for transporting Bolero to Bangladesh

Railway Minister Piyush Goyal shared on social media that a total of 87 Bolero pick-up vans were transported to Bangladesh via the Indian Railways.
By : HT Auto Desk
| Updated on: 26 Oct 2020, 17:26 PM 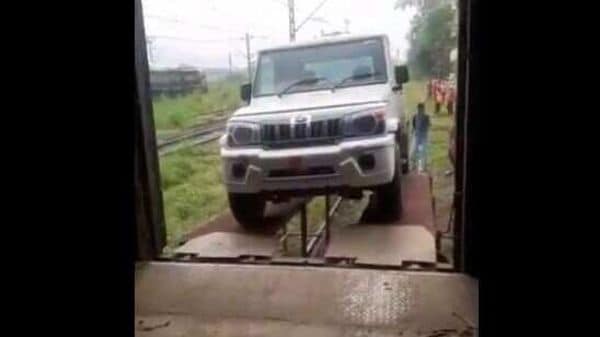 Photo of a Mahindra Bolero pick-up van being loaded on to a railway carrier. (Photo courtesy: Screengrab of a video posted by Piyush Goyal on Twitter)

Mahindra Group Chairman Anand Mahindra has acknowledged the Indian Railways' efforts for transporting its 'Made in India' Bolero pick-up vans to Bangladesh. The Boleros were loaded from Maharashtra's Navi Mumbai and unloaded at Benapole in Bangladesh.

Mahindra shared a tweet posted by Railway Minister Piyush Goyal with a caption saying, "Bambaiyya Boleros going to Benapole in Bangladesh. I like the sound of it. Smiling face with smiling eyes Thank you Indian Railways...."

The tweet consisted a video showing a Bolero pick-up van being driven inside a train carrier. Goyal mentioned in this tweet that the Indian Railways loaded a total of 87 pick-up vans from Navi Mumbai. He stressed on how railways is boosting the export of automobiles from the country. "Offering safe, swift & economical logistic solutions, Railways has emerged as a preferred mode for automobile transportation," he wrote.

Bambaiyya Boleros going to Benapole in Bangladesh. I like the sound of it. 😊 Thank you Indian Railways.... https://t.co/hPTUeyiYIh

In the recent times, automobile manufacturers such as Kia Motors, Maruti Suzuki and Hyundai have fast depended on railways for a cost effective, reliable and environmentally friendly ways of transporting vehicles. From April to September this year, the railways loaded 836 rakes of automobiles as against 731 rakes in the previous year.

Maruti Suzuki, which has been using the rail mode for over six years, dispatched 1.78 lakh units using the mode in 2019-20, a 15% jump over figures from a year earlier. Recently, a fresh batch of Kia Seltos and Sonet SUVs was also spotted being transported via railways.