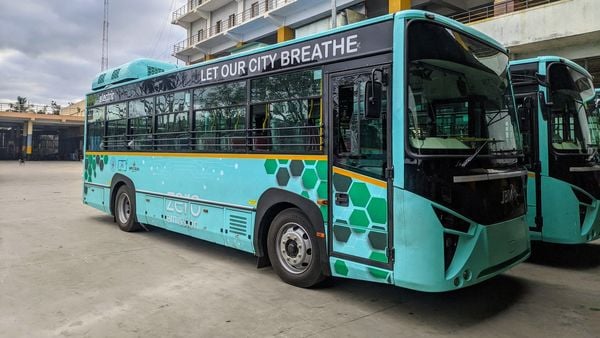 Karnataka’s first ever rollout of electric buses for public transportation.

Commuters in Karnataka's state capital Bengaluru will be able to experience ride in electric buses now. The city saw the first batch of electric buses flagged off by the state's Chief Minister Basavaraj Bommai on Monday. These buses, developed by JBM Auto, will ply under the Bangalore Metropolitan Transport Corporation (BMTC).

"The JBM ECO-LIFE electric buses will be running under the metro feeder services in the Smart City initiative. Earlier this year, JBM Auto had received an order of 90 non-AC electric buses for the city of Bengaluru," JBM said in a release.

"This e-bus service marks the first ever rollout of electric buses in the state of Karnataka. These buses shall be operated from the Kengeri, Yeshwantpur and KR Puram bus depots," it added.

The electric bus, developed by JBM Auto, is capable of covering a distance of 120 kms on single charge with a maximum speed of 70 kmph. Noting that the non-AC buses have a seating capacity of 33 passengers and a driver, JBM said these buses are equipped with six Lithium Nickel Manganese Cobalt Oxide (NMC) battery packs.

JBM’s ECO-LIFE electric buses are also in service in other parts of the country, like in Navi Mumbai under Navi Mumbai Municipal Transport Corporation (NNMT). A total of 30 ECO-LIFE buses are a part of the NNMT. Earlier this year, JBM supplied 105 electric buses in Ahmedabad and the Andaman and Nicobar Islands.