The electric bus has the capacity to run about 200 to 250 km on a single charge with air-conditioner on, in the traffic conditions.The vehicle has features such as USB charger provision for mobile charging, emergency alarm, stop buttons and emergency exits, among others.
By : PTI
| Updated on: 22 Oct 2020, 06:13 PM 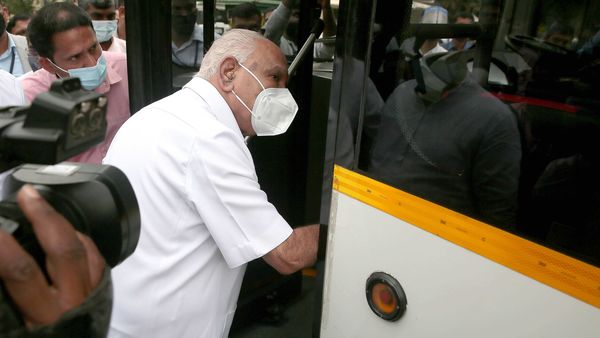 Chief Minister B S Yeddyurappa takes a look at Olectra, an electric bus launched by DCM and Transport Minister Lakshman Savadi for BMTC, in Bengaluru on Thursday.

The maiden trial run of the first electric bus of the Bangalore Metropolitan Transport Corporation began in the city on Thursday.

Deputy Chief Minister Laxman Savadi, who holds the transport portfolio, was part of the maiden ride from Shantinagar bus stand to Vidhana Soudha.

Chief Minister B S Yediyurappa who inspected the bus at the Vidhana Soudha, expressed his pleasure over the initiative of the BMTC.

Later, speaking to reporters, Savadi said the 12-metre long, 35-seater electric bus is fully air-conditioned, which has an automatic gearbox.

The bus has the capacity to run about 200 to 250 km on a single charge with an air-conditioner in the traffic conditions.

According to a statement issued by the BMTC, the bus that can operate with 100 to 125 passenger consistent load has wheelchair provision with kneeling feature for specially-abled and senior citizens.

The vehicle has various other features like USB charger provision for mobile charging, emergency alarm, stop buttons and emergency exits for safety purposes, the officials said adding that the electronically controlled air suspension with disc brakes at front and rear adds to its safety.

The Department of Heavy Industries (DHI) of the Government of India has sanctioned 300 electric buses to the BMTC for operational cost model under the Phase-2 of FAME India scheme, the statement read.

Under the scheme, the DHI will provide a maximum demand incentive of ₹55 lakh for each bus.