Automakers churn out crossovers, in sync with evolving aspirations

Carmakers are increasingly taking to this emerging category within hatchbacks as the small car segment continues to shrink in terms of its relative size in the overall passenger vehicle market.
By : Amit Panday
| Updated on: 14 Jan 2020, 10:56 AM 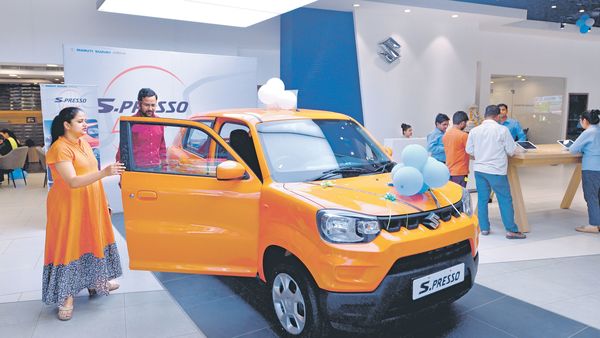 Ritesh Gupta is a 30-year-old chartered accountant at a software firm in Pune. He recently bought a Maruti Suzuki S-Presso model as his family liked the small car which mirrored the profile of a small sport-utility vehicle (SUV). Gupta took cues from his neighbour who owns a Renault Kwid small car that also has a muscular design.

Hatchbacks such as Maruti’s S-Presso and Ignis, Renault’s Kwid and Ford’s Freestyle do not look similar to conventional small cars such as the Maruti Alto and Hyundai Santro. Instead, these models offer more prominent exterior styling and cabin space to keep up with the evolving aspirations of the young customers.

Carmakers are increasingly taking to this emerging category within hatchbacks as the small car segment continues to shrink in terms of its relative size in the overall passenger vehicle market.

Kavan Mukhtyar, partner and leader-automotive at PwC India, views the emergence of hatchback crossovers as an attempt by carmakers to expand the core customer base of small cars.

“The origin of such shifts, the crossovers in small cars, essentially lies in the changing consumer preferences. Car buyers feel SUVs offer powerful road presence. All major car manufacturers want share of that growing pie and bank upon it via crossovers on small car platforms," he said.

Maruti Suzuki, India’s largest carmaker, introduced the S-Presso on 30 September 2018 and referred to it as a mini-SUV.

The carmaker has been drawing bookings of more than 400 units of the new model each day since its launch.

According to a conservative estimate by analysts, Maruti has sold more than 35,000 units of the S-Presso models until December-end.

The Kwid is considered as the first crossover built on a small car platform. “Launched in 2015, it challenged the best-selling entry-level cars such as the Maruti Alto and Hyundai Eon. While initial bookings poured in for Kwid resulting into a huge order book, it remains a moderately successful small car till date," an automotive consultant said, requesting anonymity. He estimates the market for hatchback crossovers to have grown from 21,500 units in 2015 to 175,000 units in 2019.

Vangaal of IHS Markit forecasts the current market size of this emerging category to more than double up to 400,000 units annually in 6-7 years. “We expect the market to see multiple new launches in the hatchback crossover category from Tata Motors, Hyundai Motor India, Renault India and others," he added.