Upcoming Aston Marin V12 Vantage gets a redesigned front bumper when compared to its V8-powered counterpart and Vantage Roadster.Aston Martin V12 Vantage will mark the end of the road for the twelve-cylinder mammoth engine of the luxury carmaker.
By : HT Auto Desk
| Updated on: 14 Dec 2021, 13:28 PM 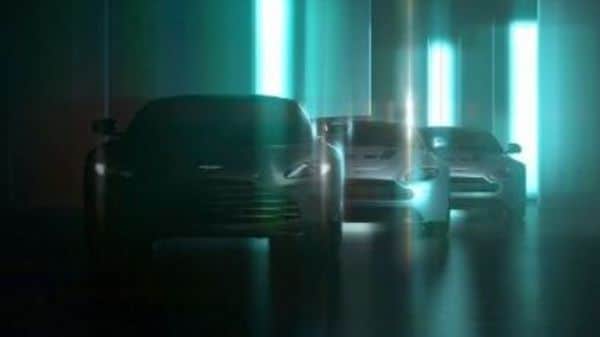 British luxury carmaker Aston Martin has teased the V12 Vantage sports car on its social platforms, showing off the front end of the upcoming vehicle. Set for a debut in 2022, the production version of the sports car variant looks different from the the prototype version caught testing at the Nürburgring last August.

Aston Marin V12 Vantage gets a redesigned front bumper when compared to its V8-powered counterpart and Vantage Roadster that feature a slightly larger front grille, vertical air intakes and a more prominent two-part splitter. While the other angles of the sports car haven't been revealed yet, expect the vehicle to get a new pair of wheels and wider rear fenders as well as a larger rear diffuser with center-mounted exhaust pipes.

Beside the new Aston Martin V12 Vantage, there is a limited-production V600 V12 Vantage and the regular V12 Vantage from the previous generation. Other V12-powered Vantage-based models from ASton Martin include V12 Zagato coachbuilding project and V12 Speedster. However, the upcoming V12 Vantage will mark the end of the road for the twelve-cylinder mammoth engine.

While the naturally aspirated 6.5-litre V12 engine of the Aston Martin Valkyrie hypercar will continue to exist, that is a completely different motor. The automaker's V12 engine will go obsolete as the world is making a shift towards electric mobility.

Earlier this month, the luxury car manufacturer teased the exhaust note of the V12 Vantage high-performance car and the sound is menacing. The model is expected to get a newer infotainment system, likely the MBUX. The sports car is expected to churn out a similar drive performance as the Aston Martin V12 Speedster, putting out 690 hp of peak power and 753 Nm of massive torque. The Speedster can sprint from 0-100 kmph in just 3.4 seconds and run at a maximum speed of 319 kmph.