Durian, described by some as smelling like an open sewer or turpentine when ripe, is considered a delicacy and is hugely popular across many parts of Asia, where it is known as the king of fruits.
By : Reuters
| Updated on: 10 Mar 2020, 12:00 PM 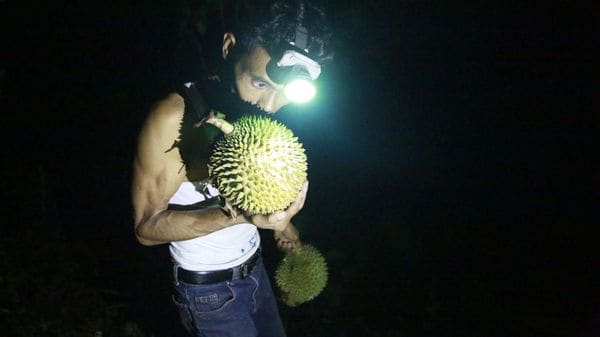 This photo taken on February 15, 2020 shows an Indonesian farmer smelling a durian fruit as he collects them in Talang Mulya village in Teluk Pandan in Lampung province.

Pungent, spiky durian - a fruit banned in many public places in Asia due to its foul smell - has been used by scientists to store electricity, and could one day help power electric vehicles and mobile phones across the region.

University of Sydney researchers took the non-edible waste from durian and jackfruit - usually disposed of in landfill at a high cost - to create environmentally friendly and odour-free electricity storage for fast charging.

"We looked at durian and jackfruit because about 70% of the fruit is not edible," Vincent Gomes, an associate professor at the university, told the Thomson Reuters Foundation on Monday.

"We thought about using the template that nature provides - a waste material with zero cost that is typically sent to landfill - and processed that into making this super-capacitor electrode," he said.

Durian, described by some as smelling like an open sewer or turpentine when ripe, is considered a delicacy and is hugely popular across many parts of Asia, where it is known as the "king of fruits".

The region, like other parts of the world, is investing heavily in renewable energy projects in order to meet its international climate pledges and cut planet-warming emissions.

The researchers ground down the durian waste, and in an inexpensive, non-toxic and non-hazardous process that included heating the substance in water and freeze-drying it, they were able to create energy stores for fast electricity charging.

Renewable energy can be banked while it is being generated, for use later, with solar power a "particularly attractive" source as there is so much available across Southeast Asia.

"To be able to store that inexpensively, in large quantities, would be a big game-changer," said Gomes, who also "loves" the taste of durian. "One can store the energy and use it at night when the sun isn't shining."

Batteries made from durian and jackfruit would last longer and charge faster than the lithium-ion batteries currently used to power mobile phones, tablets and electric cars, said Gomes.

The researchers are now talking to companies with the aim of making a prototype battery that could eventually be marketed.

"A fantastic outcome would be to have these super-capacitors charge, for example, tuk-tuks or scooters quickly," Gomes said.

"In villages, instead of burning diesel engines they can rely on these energy storage devices to light up throughout the day," he added.