As coronavirus raged, China snapped up luxury cars made in America 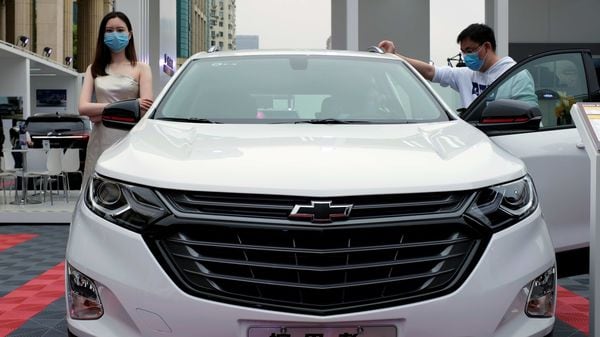 A model wearing a face mask following the coronavirus disease (Covid-19) outbreak stands next to a Chevrolet vehicle at a sales event in China.

Alabama’s auto exports to China in the first quarter of 2020 soared more than 170% from a year ago, Greg Canfield, the state’s secretary of commerce, said in an interview. Three foreign automakers — Honda, Hyundai and Daimler Mercedes-Benz — operate assembly plants in the state, which hasn’t yet broken down the Chinese exports for each company.  Together they produce about a million vehicles a year in Alabama for domestic sales and export, Canfield said.

“By far our largest exporter on the automobile side comes from Mercedes," he said. The Alabama Mercedes plant is the exclusive worldwide manufacturer for some of its most popular sport-utility vehicles, including the GLE and GLS, which sell at base prices of more than $50,000 in the U.S.

“The luxury makers are doing exceptionally well in China," said Alan Baum, principal of the auto-industry research firm, Baum and Associates. “Yes, there’s a short-term economic problem, but just as you’re going to see in the U.S. as the auto industry recovers, it’s going to recover at the top end well before it recovers at the bottom end."

A Daimler spokesperson declined to comment on its export volume. Mercedes said last month that it delivered 477,400 cars worldwide in the first quarter.

Alabama’s overall exports to China grew 45% to $534 million in the first quarter over the year earlier, according to U.S. Census Bureau data. The strong showing compares with a relatively weak first quarter in 2019, Canfield noted: “We were one of the hardest-hit states in terms of the trade wars." Indeed, the 2019 period was the state’s worst first-quarter showing for merchandise exports to China in more than a decade, according to census data.

Most U.S. states haven’t fared as well as Alabama this year when it comes to selling into the world’s second-largest economy. More than half saw merchandise exports to China fall this year compared with the first quarter of 2019, despite the trade deal signed in January between the two countries.

In South Carolina, where BMW makes its own luxury SUVs and where it operates its largest global plant, total exports to China plunged 56% in the quarter, according to census bureau data. For its part, BMW’s China sales were down by a couple thousand cars, a spokesman said. South Carolina sold about $6.5 billion in goods last year to China, up 16% from 2018.

Much of the state’s export pain this year stems from a slowdown in deliveries of Boeing’s 787 Dreamliner planes, many of which are assembled in North Charleston. Travel restrictions kept pilots from being able to pick up planes, and airlines, already dealing with nearly-empty cabins, didn’t need to add more aircraft to their fleets.

Exports account for nearly 20% of the state’s economy and China is the largest market, said William Hauk Jr., associate professor of economics at the University of South Carolina.

The U.S. and China reached phase one of a trade accord in January that committed the Asian country to increasing American purchases by at least $200 billion over the next two years — including about $78 billion in manufactured goods over the 2017 level. Since then, tensions have escalated and President Donald Trump threatened to “terminate" the deal if Beijing failed to honor the terms.

This has states with strong export economies watching nervously.

“Export opportunities around the globe are critically important to the Alabama economy," Canfield said. “There’s a direct link between growth in exports and growth in jobs. We support the concept of having fair trade. But we also believe you have to maintain open channels of trade as you negotiate."

If trade breakdowns or Covid-19 lead to prolonged job losses, there could be political fallout, even in states where party loyalties have been stable for decades.

“You could possibly see some anti-incumbent sentiment if there is an economic downturn," Hauk said. “Do I think there would be a permanent shift? Probably not. But it’s hard to say what the consequences for 2020 would be."