Tesla Model 3 is likely to dominate EV space in Israel while Tesla Model Y also on product list.All imported Tesla models will have to undergo standardized tests before being sold in Israel.
By : HT Auto Desk
| Updated on: 31 May 2021, 09:03 AM 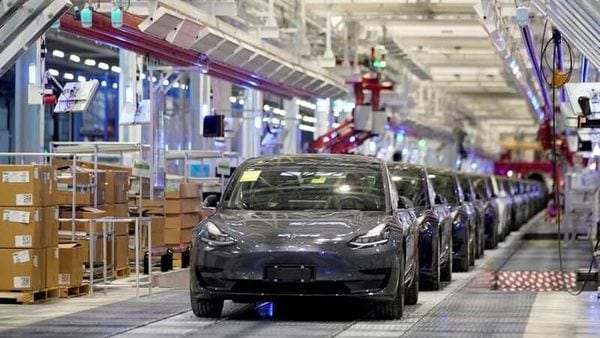 A fresh and large batch of Tesla vehicles are expected to dock at Israel's Ashdod port this week, helping the American EV company possibly grab an 80% market share in the country's battery-powered vehicle market. The Made-in-US Tesla vehicles will mostly consist of Model 3 while Model Y units are also part of the consignment.

Israel's Globes recently reported that the incoming shipment consists of 1,170 Tesla vehicles on board a ship that is expected in Israel at some time this week. Around a month ago, a batch of 1,500 Tesla Model 3 units, made in China, had arrived here. As such, Tesla is widening its presence in the Israeli EV market and is likely to increase it to 80%.

Sales of the vehicles aren't expected to start any time this year because the imported vehicles first need to pass the standardized tests mandated by the local rules of Israel. But at a time when many expected delays in shipment owing to the recent Israel-Palestine conflict, not much impact has been seen on ground.

Tesla has been looking at entering newer markets in recent times and further strengthening position in markets in which it has had a presence. The company had entered Israel in February but has since taken quite a lead among EV players. The Model 3 is the most affordable Tesla available and is priced at 180,000 shekels (around ₹40 lakh). Apart from cars though, Tesla is also looking at building a strong network of its Supercharger to support EVs here. Past reports have suggested that superchargers are likely to come up at Haifa, Eilat, and Be'er Sheva, apart from Tel Aviv.

It is not yet clear if buyers in Israel will take to Tesla vehicles in a big way - as has been seen in China, the US and several European markets. But what is certain though is that while Tesla may be a premium offering here, an expanding support infrastructure is likely to boost prospects.