Apple said that is is currently working with BMW and Ford to support easy routing in their vehicles and will eventually add more manufacturers to the list.The iOS 14 update is due this autumn.
By : HT Auto Desk
| Written By : Deepika Agrawal
| Updated on: 23 Jun 2020, 05:00 PM 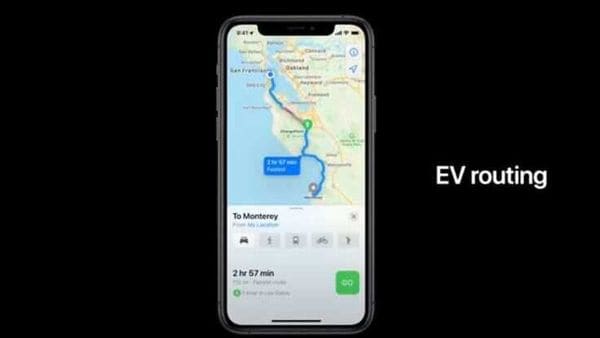 The world is aiming to accelerate towards a green future with almost every automaker working towards reducing its carbon footprint. Many countries have started giving incentives to promote adoption of electric cars and hybrid vehicles in order to boost sales of new energy vehicles.

Many drivers are also getting environmentally conscious and steering away from fossil fuel-guzzling vehicles and Apple has some good news in store for them.

The company has added new features to its Maps app - EV routing and cycling directions. These features are upcoming updates to the Maps app coming with new iOS 14 this autumn.

At its annual World Wide Developers Conference 2020 conference, Apple said that the EV routing feature aims to eliminate range anxiety, i.e., the fear of running out of charge, for drivers planning a long road trip in their electric cars. The Maps on iOS 14 will track the car’s current charge and factor in things like elevation and weather to automatically add charging stops along the route. It will also identify the kind of charger that goes with the EV and add only compatible charging stations to the route.

Apple said that is is currently working with BMW and Ford to support easy routing in their vehicles and will eventually add more manufacturers to the list. The tech company is also adding features that lets drivers view congested routes and green zones, allowing them to pick alternate routes to avoid congestion.

In China, drivers can only enter congestion zones on particular days. Apple Maps will allow them to securely store their license plate number on their iPhones so that they can easily keep track of which days they can enter congested city centers.

Another long-awaited feature added to the Maps - cycling routes - helps people get around towns on their bikes with the help of dedicated cycling lanes. Cyclists will be able to see elevations or stairs on the route, allowing them to decide if they should take a flight of stairs to save time. The cycling route feature will initially be available in select cities - New York, Los Angeles, San Francisco, Shanghai, and Beijing - and later be added to more cities.