Home Auto News Another Day, Another Hike As Petrol And Diesel Prices Continue To Rise

Another day, another hike as petrol and diesel prices continue to rise

Petrol price in Delhi has breached ₹80 per litre mark but diesel remains more expensive.Petrol and diesel prices have maintained their upward price climb and the hikes are likely to continue till at least the end of June.
By : HT Auto Desk
| Updated on: 26 Jun 2020, 08:30 AM 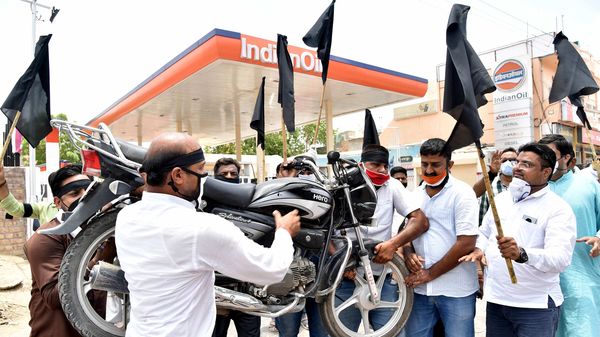 Rising petrol and diesel costs have resulted in protests in many cities across India while a political bickering has also emerged due to it.

Petrol and diesel rates once again saw an increase on Friday, maintaining the northward trend that began on June 7 and has continued since. Diesel remained more expensive than petrol in Delhi with a litre of the fuel now costing ₹80.19, six paise more than petrol.

Diesel may still be cheaper than petrol in other metropolitan cities but prices of both fuels have touched new highs in recent weeks. In Mumbai, a litre of petrol and diesel cost ₹86.91 and ₹78.51, respectively. A litre of petrol in Kolkata now costs ₹81.82 while diesel's per litre cost is ₹75.34. In Chennai the petrol and diesel rates now stand at ₹83.37 and ₹77.44, respectively.

Indian Oil Corp had previously informed that it is because of VAT imposed by the Delhi government that diesel prices had shot past petrol on Wednesday.

The taxes imposed on the two fuels by the central government as well as state governments form a large part of the final retail selling price. There has been a demand to bring the two fuels under Goods and Services Tax (GST) but its possibility remains extremely bleak. For now, governments are looking at revenue generation after weeks of lockdown created roadblocks in this regard. Oil marketing companies too are looking at cutting back on losses after having stopped daily fuel price revisions for 83 days up until resuming it on June 7.

There are enough indications, strong signs even, that fuel prices will continue to rise for the remaining days of June.