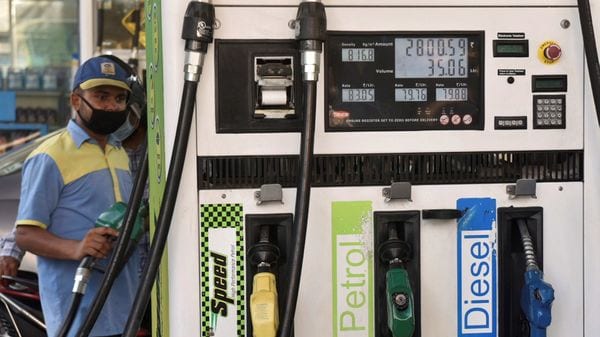 An employee works at a fuel station in New Delhi on Wednesday (June 24).

Diesel prices in Delhi shot past petrol prices on Wednesday for the first time ever in what was the 17th successive hike in fuel prices. A litre of the fuel now costs ₹79.88 in the national capital, 48 paise more than a litre of petrol which did not see a price change on the day. While this has led many to once again question the rationale behind the flurry of price hikes, Indian Oil Corp (IOC) has revealed why the price structuring of the two fuels in Delhi are the way they are.

Speaking to members of the press, IOC chairman Sanjiv Singh said that Wednesday's hike saw diesel prices going past petrol in Delhi due to a hike in VAT here. He said VAT is lower in other cities which has meant diesel remains cheaper than petrol. "The Delhi government had increased VAT on petrol from 27 per cent to 30 per cent and that on diesel from 16.75 per cent to 30 per cent on May 5," he said.

Singh also informed that in many cities, diesel remains substantially cheaper than petrol despite hike in prices of both fuels. He referred to Pune where the per-litre price difference is ₹9.50. In most state capitals, the difference is around ₹3.50.

There may be more hikes in the offing across the country which is likely to propel fuel prices to the 90s in the days to come. "While we had negative cracks (margins), individual states raised VAT and central excise was also hiked. Even if oil prices are to stabilise, it is quite likely that prices may still rise."

The murmurs against the hike in fuel prices is steadily gaining decibels - out on the streets as well as in political circles. Governments are looking at revenue generation after weeks of lockdown piled up pressure. Taxes on fuel become the go-to option in times like these since these account for nearly two-thirds of the retail selling price.

Diesel prices, in particular, have been around ₹18 to ₹20 cheaper per litre than petrol but that gap has been getting erased steadily.