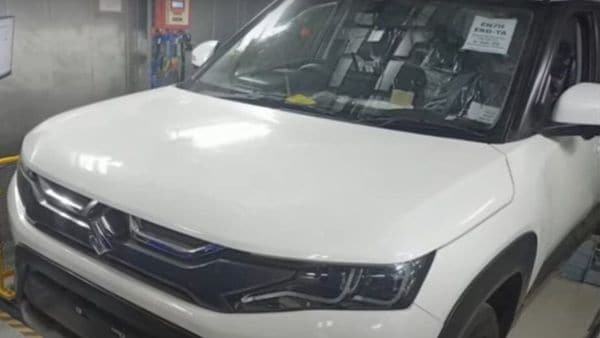 Screengrab from the video posted on YouTube by eXtreme Media.

Maruti Suzuki Vitara Brezza is one of the most successful modern cars from the brand. The car has received a facelift since its introduction in the Indian market. Now, the automaker is working on an all-new Maruti Suzuki Brezza, pictures that have been leaked online. As the images of the car reveal, there are significant changes the compact SUV has undergone and it would be reportedly launched sometime in 2022. Test mules of the car were recently spotted undergoing public road testing under heavy camouflage.

It is reported to be based on the same Suzuki Global C platform as the outgoing model. However, the new model would come with Maruti Suzuki's Smart Hybrid technology and the premium variants may also get paddle shifters. The latest pictures show that the automaker has tried to update the looks of the car making changes in the body panels and sheet metal.

The 2022 Brezza gets a revised front fascia new fenders and bonnet where the latter gets a flatter design allowing a clamshell design to be highlighted. Headlamps and grille have been incorporated together to form a single unit and there is also a presence of some matte black elements in between. From the pictures, one can also observe that there are two chrome strips surrounding the Suzuki logo.

The front bumper will come with the usual integrated bull-bar in black though it sports a pair of enlarged endplates at either end that merge with the wheel arches.

At the rear of the new car, the wraparound tail-lamps have now been extended to the altered tailgate and the number plate has been positioned below the lamps with Brezza written across the rear body. The rear bumper is also new and will have a black insert with silver accents on the false skid plate. However, the bodyshell of the new compact SUV remains the same as the outgoing model. It is being suggested that some of the variants of the new model might get a sunroof as well.

Expect 2022 Brezza to get a new infotainment system with a free-standing touchscreen unit and will also feature connected technology. There is also a possibility that the car can feature Maruti’s new digital architecture.

Under the hood, the new model can feature a 1.5-litre petrol engine capable of producing power of 103 bhp and a maximum torque of 138 Nm. It can also come with either a four-speed automatic transmission or a five-speed gearbox.