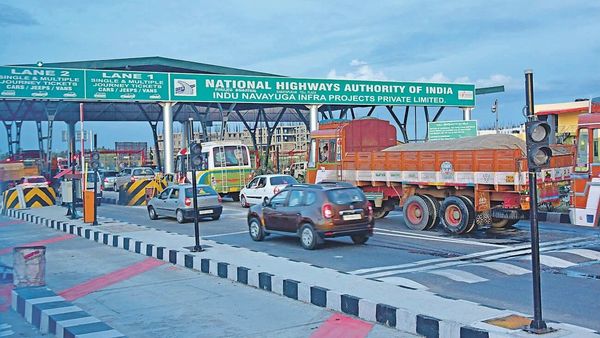 The pan-India roll out of electronic toll collection on national highways (NHs) has resulted in issuance of 1.10 crore FASTags till date, as per NHAI.

The National Highways Authority of India (NHAI) started electronic toll collection through RFID-based FASTags on its 523 toll plazas across the country from December 15 for seamless flow of traffic.

FASTag is a prepaid tag, affixed on vehicle's windscreen, that enables automatic deduction of toll charges and lets the vehicle pass through the toll plaza without stopping for cash transaction.

"About 1.10 crore FASTags have been issued through multiple Point of Sales (PoS). The highway authority has been observing sales of nearly 1.5-2 lakh FASTags daily which is a clear reflection of this digital system being accepted well," a NHAI official told PTI.

As a result, the daily electronic toll collection has touched about ₹46 crore, the official said.

FASTag implementation is proving to be instrumental in easing commuting on national highways and is gaining a great sense of acceptance from highway users, he said.

"Within eight days of FASTag implementation, FASTag's toll transaction has reached about 24 lakh on a daily basis," the official added.

NHAI is working hard to iron out the teething issues as reported by commuters since implementation of FASTags, the official said, adding that all the issues that have been flagged off so far are being addressed diligently by experienced NHAI officials on and off the ground.

In order to give prime importance to existing FASTag users, dissuade defaulters and further encourage adoption of FASTags by commuters, vehicles without FASTags entering FASTag lane are being charged double the toll fee.

This has also resulted in smooth and hassle-free movement of FASTag users on highways.

The adoption of FASTags also means that it has brought in the much needed transparency in collection at the toll booths, the official said.

Regional officers have been authorised to take on the spot decision for converting up to 25 per cent lanes to hybrid lanes on case-to-case basis to avoid traffic pile up at high traffic volume fee plazas.

Studies have shown that smooth passing without stopping at toll plazas is likely to save thousands of crores every year for the nation.