Tigor EV comprises 25% of the sedan's FY22 sales; every 6th Nexon sold is an EV

Tigor EV and Nexon EV are the only two electric cars from Tata Motors and together they grab the largest chunk in the Indian electric car market.
By : HT Auto Desk
| Updated on: 16 Jun 2022, 05:01 PM 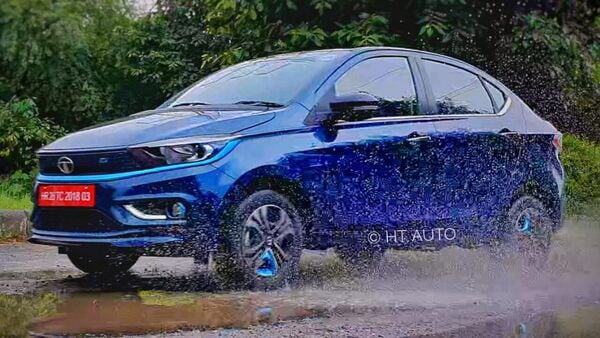 Tigor EV is the most affordable electric car in India at present.

Tata Motors has claimed that every fourth Tigor sub-compact sedan sold in the last financial year was an EV, contributing 25% of the total sales of Tigor. Also, the homegrown automaker claimed that every 6th Nexon compact SUV sold in FY22 was an EV. The automaker has stated this in its annual general meeting. The automaker also claims that in FY22, it grabbed 12.1 per cent market share in the domestic passenger vehicle market, while in the electric car market, it held the lion's share at a whopping 87 per cent. The majority of this is attributed to the Nexon EV, while the rest goes to Tata Tigor EV, which is currently the most affordable electric car in India.

The automaker claims that introducing the updated Tigor EV in the last fiscal and further strengthening its EV segment positioning helped the OEM to grab the largest chunk in the category. The automaker attributes this success to new product launches, strong acceptance and positive sentiment of existing customers. Also, increased fleet mobility solutions, sales and service network strengthening too have helped along with enhanced charging solutions and easier financing options.

Tata Motors also said that its EV sales witnessed a rapid growth in demand with Nexon EV and Tigor EV. Its annual EV sales touched 19,105 units in FY22, registering a 353 per cent YoY growth compared to FY21. Quarterly sales of Tata's electric cars were highest at 9,095 units in Q4 FY22, marking a 432 per cent growth compared to Q4 FY21. The automaker's EV sales for March 2022 were also the highest at 3,357 units, recording a growth of 377 per cent over March 2021, claimed Tata Motors.

Following the success of the Nexon EV and demand for more range from consumers, Tata Motors recently launched Nexon EV Max with a 40.5 kWh lithium-ion battery pack, which promises an improved range of 437 km and 33 per cent higher battery capacity as well.