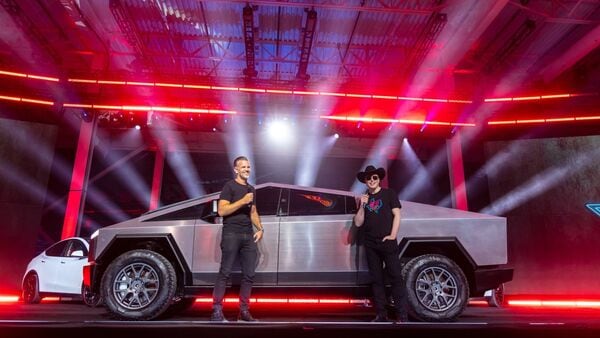 Tesla has showcased its Cybertruck all-electric pickup truck again at the Cyber Rodeo event at its new Giga Texas. The latest version of Tesla Cybertruck revealed some changes and improvements compared to its previous prototypes. The overall silhouette of the Tesla Cybetruck appears identical to the previous prototype, but there are some significant changes.

One of the changes is that Cybertruck's rear glass does down electrically. The cabin of the electric pickup truck has been revealed as well. It appears incomplete with a yoke inspired by Tesla Model S and Model X and a missing airbag as well. Expect the interior of the EV to receive more elements and updates.

The Cybertruck gets side view cameras positioned in a different spot in the latest prototype than previous ones. They are positioned in plastic cladding around the front wheels and it could be the final positioning for them.

At the Cyber Rodeo, Tesla CEO Elon Musk has reconfirmed that the Cybertruck will enter production in early 2023. It is likely to start deliveries in the same year as well.

Tesla Cybertruck is one of the most awaited EVs from the US electric vehicle brand. The Cybertruck will be built in the Giga Texas. The car was originally supposed to roll out in late 2021. However, Tesla pushed the production timeline to late 2022 and finally to early 2023.

Tesla has received flak from critics for delaying the launch of the Cybertruck. At the same time, several other automakers such as General Motors and Ford Motor Company have already brought their respective electric pickup trucks like GMC Hummer EV and Ford F-150 Lightning to the market, throwing challenges to Tesla Cybertruck.