Ola Electric provided yet another glimpse at what would be its first-ever electric car.

Ola Electric on Monday gave yet another glimpse at its first-ever electric car with CEO Bhavish Aggarwal touting it as the next big development after his company showcased and started selling its S1 Pro electric scooters last year. The Ola Electric car is set of its official launch in 2024 and is already being touted as the quickest battery-powered four-wheeler in the country.

Ola Electric informed it has sold 70,000 units of its S1 Pro scooter and on Monday, also launched its more affordable S1 scooter at ₹99,000. But the bulk of efforts now seem to be on the Ola Electric car that claims to hit 100 kmph in four seconds and can travel 500 kms before needing to be plugged in.

Aggarwal also claims that the electric car will have an all-glass roof, keyless operation, will have a drag coefficient of 0.21 and also feature assisted drive technology.

Ola Electric has been making some very tall promises of revolutionizing the Indian EV (electric vehicle) sector and its S1 Pro electric scooter did receive a very strong initial response. Multiple indications suggest though that that reception has since thawed even as the company claims it continues to enhance production capabilities at its FutureFactory near Bengaluru. At full capacity, Aggarwal brags the facility would be able to manufacture one million electric cars and 10 million electric scooters each year. 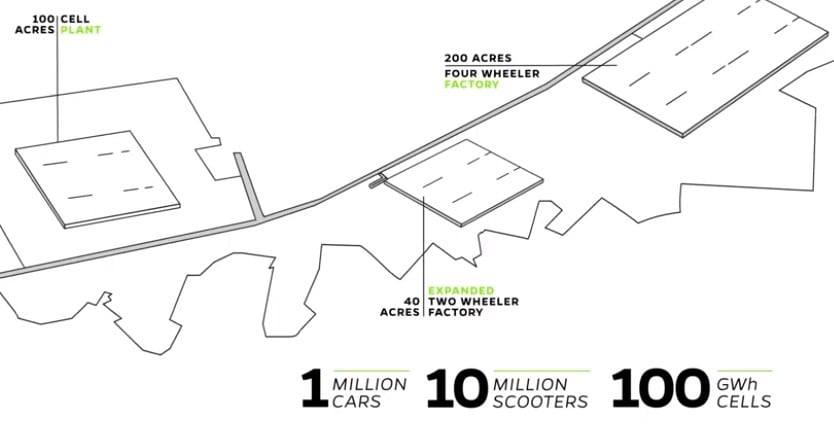 Ola Electric shares its ambitions of having its FutureFactory as the epicenter of the EV movement here.

All eyes now would also be on the Ola Electric car. While the Indian EV story is being powered by battery-powered three and two-wheelers, the passenger vehicle segment has not seen much activity. Not in the mass-market segment anyway. Tata Motors has a strong grip over the mass-market EV space with three products while the other notable players of note are Hyundai - courtesy Kona, and MG Motor India, courtesy ZS EV.

From expensive upfront acquisition cost to slow pace of development in charging infrastructure, reasons for the relatively slow pace of adoption in the four-wheeler space has been aplenty. Manufacturers such as Maruti Suzuki and Toyota are backing hybrids or CNG, or both. And while there may be general consensus that EVs are inevitable, the present scenario may not be seen as ideal for battery-powered cars. But Ola Electric appears to see this as an opportunity, a fertile field ripe for the taking.

Maruti Suzuki to double car transportation by rail in India