Anand Mahindra, Chairman of Mahindra and Mahindra praised Jothi Viknesh for riding his Mahindra Treo electric three-wheeler to reach one of the highest mortorable passes in the world.
By : HT Auto Desk
| Updated on: 29 Jul 2022, 15:17 PM 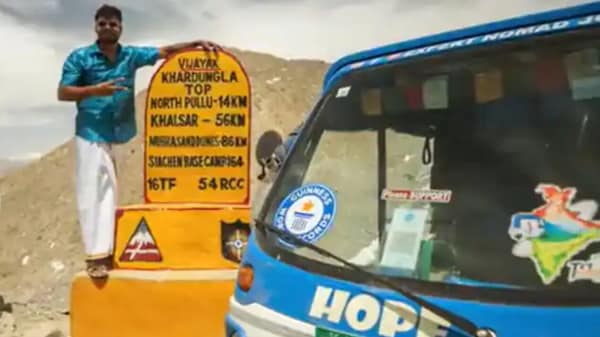 Mahindra Treo is the first electric three-wheeler to reach Khardung La pass in Leh, one of the highest motorable passes in the world. Anand Mahindra, Chairman at Mahindra and Mahindra shared a video on his social platform which shows the electric three-wheeler on top of the pass. The Mahindra Treo Electric Auto, driven by a person named Jothi Viknesh, reached the height of 17,982 feet, is the first electric auto to reach such a height.

Praising the person behind the wheels of the Treo, Mahindra wrote, "Thank you Jothi, for taking the Treo to the Top of the World…"

Mahindra Electric Mobility launched its electric Treo on December 16 last year at an ex-showroom price of ₹2.09 lakh. This price is after FAME-II and other state subsidies. Mahindra Treo has a top speed of 50 kmph and offers a range of 80 kms on a single charge. It is powered by a 48V lithium-ion battery with a capacity of 7.37 kWh. It takes nearly four hours to fully recharge. Mahindra claims that the electric auto runs at a price of only 50 paise per km. This saves up to ₹45,000 per year as compared to the cost of fuel.

The front suspension of the Treo is equipped with helical springs, dampers and hydraulic shock absorbers. Its rear suspension has a rigid axle with leaf spring. This electric auto comes with hydraulic brakes at the front and rear. Mahindra Treo also offers features like regenerative braking system which ensures minimum wastage of energy. It also gets a digital dashboard, an IP 65 rated battery box, remote monitoring of range, speed, and location of the vehicle as well.

Earlier this year, Mahindra launched the Treo electric three-wheeler in Nepal as well. Treo has been launched in Nepal in four variants, two each to sit three and four passengers besides the driver.