The move is seen as Ford's attempt to take on Tesla, world's largest EV maker, on its own turf. The US-based carmaker aims to manufacture six lakh electric vehicles every year by 2024.
By : HT Auto Desk
| Updated on: 02 Feb 2022, 12:03 PM 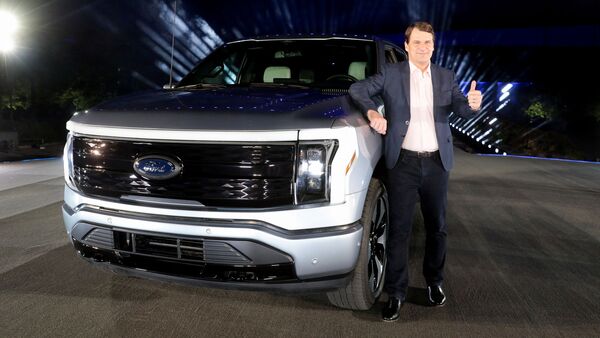 Ford Motor aims to step up its push towards electrification of its lineup with an investment of 20 billion dollars in the next few years. According to reports published by Bloomberg, the US-based carmaker will increase spending on electric vehicle manufacturing in the next five to 10 years.

The investment will aim to redesign the carmaker's facilities across the world to be ready to produce electric cars in future. The move is seen as Ford's attempt to take on Tesla, world's largest EV maker, on its own turf.

Ford Motor currently has only two offerings in the EV space. Its iconic Mustang has an electric avatar besides the carmaker's flagship pickup truck F-150 which was launched as F-150 Lightning recently. As of now, Ford aims to ramp up production of these two models. Jim Farley, CEO at Ford Motor, has announced that the company will triple the production of the electric pony and double that of the electric pickup truck.

To increase its focus on shifting towards electric vehicle segment, Ford is also undergoing several organisational changes. The company recently hired Doug Field, who helped Tesla engineer its Model 3 SUV and head Apple's project on its first electric car, to lead the EV charge for the Detroit giant.

A Ford spokesperson was quoted by Bloomberg saying, "We're carrying out our ambitious Ford+ plan to transform the company and thrive in the new era of connected, electric vehicles." The plan also includes hiring of engineers to work on concepts such as battery chemistry, artificial intelligence and EV software.

Ford Motor had earlier announced that it targets to manufacture six lakh electric vehicles every year by 2024. It aims to sell at least one electric car out of every two vehicles of its global sales by 2030.