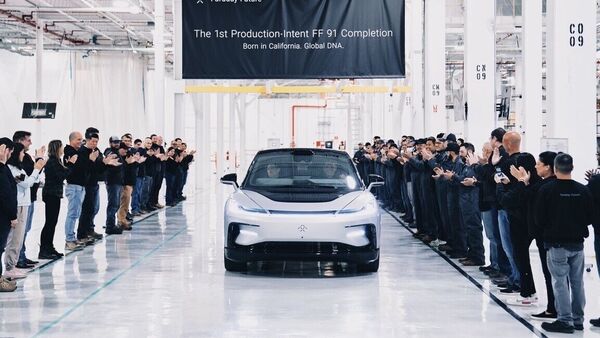 Faraday Future production-intent FF 91 EV has been manufactured at its Hanford, Calif plant.

Faraday Future Intelligent Electric Inc. is pushing back the start of production and deliveries of its long-awaited debut vehicle to the “third or fourth quarter of 2022," and says it needs additional capital to pull off the launch.

The Los Angeles-based electric vehicle startup, which went public in a July 2021 merger with a blank-check company, had previously said it planned to launch the battery-powered SUV as soon as this month. Founded in 2014, Faraday Future once promised to start making and selling the so-called FF91 SUV as early as 2018, but it has been forced to postpone delivery of its first mass market vehicles several times.

“The company needs additional cash to commercially launch the FF 91, and is currently seeking to raise additional capital to fund its operations through December 31, 2022," it said Monday in a filing. Faraday Future had previously said it wouldn’t need additional funds until after the launch of the vehicle.

The company said in an investor slide deck that it was looking to raise about $325 million. Shares of the company traded up 3.5% to $2.38 as of 5:14 p.m. in New York after closing down 12%. The stock has fallen about 57% this year through Monday’s close.

The delay comes amid a standoff between the electric vehicle startup and its founder, Jia Yueting. In late June, a shareholder group affiliated with him demanded the removal of a director from the startup’s board. Faraday pushed back, saying the group had offered the director a contract worth up to $700,000 in order for him to resign.

On July 15, those shareholders said in a filing that they had offered Faraday a lifeline of “at least $100 million" on the condition that the director resign. Several days later, the group accused the startup of not treating the offer “with the gravity, urgency and fairness it deserves in light of" its financial condition.