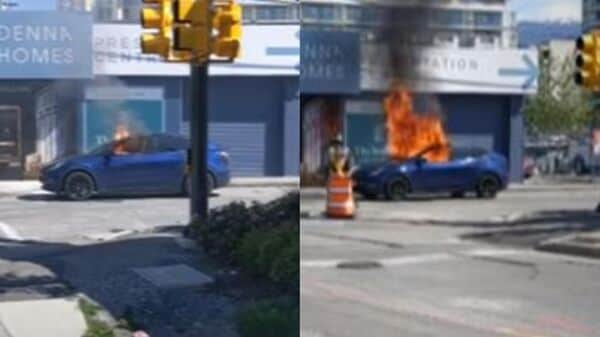 Recently, in India, several EVs have made headlines for not-so-good reasons. While some electric scooters have caught fire due to a rise in the ambient temperature in the country, others were said to have been deliberately thrown into flames due to poor performance. In a similar incident in Canada, Tesla's all-electric Model Y SUV reportedly caught fire in the broad daylight. The driver of the SUV managed to escape unhurt, as per several media reports.

As per Electrek, Jamil Jutha was driving in his 2021 Tesla Model Y which was bought just eight months back. As per Jutha, the vehicle errored and then suddenly shut down. "My car just started going into flames, not flames but it's smoking up, my battery died on my Tesla and I don't know what happened," Jutha said while describing the incident in the video. "All of a sudden the battery started smoking. My car just got set on fire. The whole car is on fire," he added.

Doors to the Tesla cars are operated electronically in regular condition, however, there is also a mechanical release system built-in for emergencies such as this. However, the driver was quoted saying it wasn't easy for him to figure the emergency release system out due to immense pressure.