BMW has also confirmed that the first model to roll out from this facility would be the i3 electric sports sedan.
By : HT Auto Desk
| Updated on: 23 Jun 2022, 08:43 AM 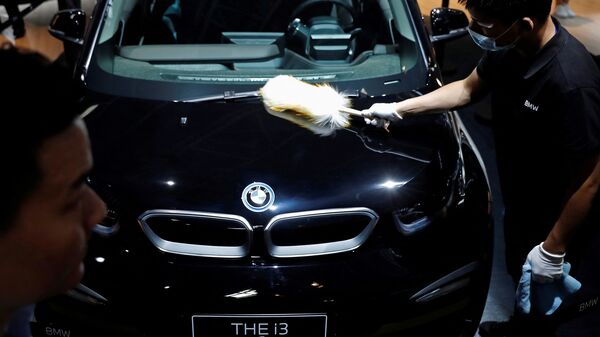 File photo: A staff member polishes a BMW i3 at the Beijing International Automotive Exhibition, or Auto China show, in Beijing.

BMW has officially started work at its latest facility located in the northeastern city of Shenyang in China from where it hopes to rapidly increase its electric vehicle (EV) output, both for the local market as well as select overseas markets. China is the world's largest automotive market as well as the biggest EV market and the newest BMW facility - the Germans now have three car assembly plants here - will potentially bolster prospects.

BMW underlines that the Shenyang facility has flexible manufacturing lines that would allow for EVs to be manufactured as per market demand. More significantly, the facility will help BMW take its annual output to 830,000 units from the 700,000 units manufactured in all of 2021.

BMW has also confirmed that the first model to roll out from this facility would be the i3 electric sports sedan. While the i3 carries a lot of expectations for the brand here, BMW is expanding rapidly and will offer as many as 13 all-electric models in China by 2023.

While the determined focus on EVs is a show of intent, BMW has not been faring too well in China in recent times. The company sold a little over 2 lakh vehicles here in the first quarter. This is a 9.2 per cent drop in sales compared to the same period of last year. And the EV war itself won't be a smooth and easy drive to the park.

The EV ecosystem in China is currently dominated by Tesla and a number of local players. Tesla plant in Shanghai was its first outside of the US and is a big base for not just units for Chinese customers but those in European countries as well. Globally, Tesla is the largest EV manufacturer although its crown is much sought after by rival brands, many of whom have a rich legacy spanning several decades.

The emergence of EVs, however, have leveled the playfield significantly. In China in particular, EV adoption is on the rise and this provides an opportunity to brands like BMW to power ahead with electric plans.