MINI Concept Aceman electric crossover gets a fully enclosed grille that is outfitted with countless LED lights and an illuminated surround.
By : HT Auto Desk
| Updated on: 26 Jul 2022, 11:09 AM 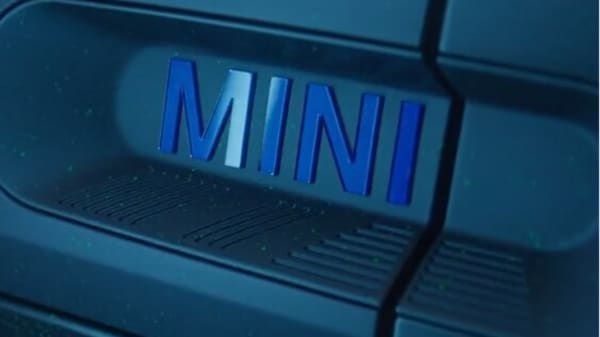 BMW MINI has teased a brand new concept electric crossover vehicle, called MINI Aceman, which is set to make its debut on July 27. The teaser video shows the crossover has something that will carry colorful accents all over it. While most of the details of the vehicle have been kept under the cover, the teaser video shows that it will have a fully enclosed grille that is outfitted with countless LED lights and an illuminated surround.

Headlights of the MINI Aceman have received a similar treatment and ditching the traditional MINI circular shape, these headlights have become a new MINI hallmark. At other places, pixel-style taillights can be seen as an assortment of animations. Additionally, the body features multi-colored mirrors and plastic body cladding.

*Taps mic* we have a big announcement soon but until then👇#MINI #BigLove pic.twitter.com/fk5eDzhAK5

Though MINI has spilled out very little information about this concept, the vehicle is expected to preview an upcoming electric crossover., and as per previous reports, the model will be built in China and be smaller than the next-generation Countryman.

The new model is also expected to offer far better performance than the Cooper SE Electric, the model that starts at $34,225 (before incentives) and features an electric motor capable of churning out 181 hp (135 kW / 184 PS) and 270 Nm of torque. This enables the car to accelerate from 0-60 mph 0-96 km/h in a respectable 6.9 seconds. With its 28.9 kWh battery pack, the electric crossover can only travel a range of 183 kilometers on a single charge.

While the MINI Paceman put the coupe into crossover coupe, it was discontinued by the company in 2016. But the model hasn't been entirely forgotten and the Concept Aceman will bring its memories back to the market.