Watch: Made in India Swift, Renault Duster fail miserably in this crash test

Maruti Suzuki Swift and the all-new Renault Duster scored zero points in the Latin NCAP crash tests recently. While Swift continues to be one of the most popular hatchbacks in India, Renault has discontinued Duster SUV some time back.
By : HT Auto Desk
| Written By : Sabyasachi Dasgupta
| Updated on: 28 Aug 2021, 09:25 AM 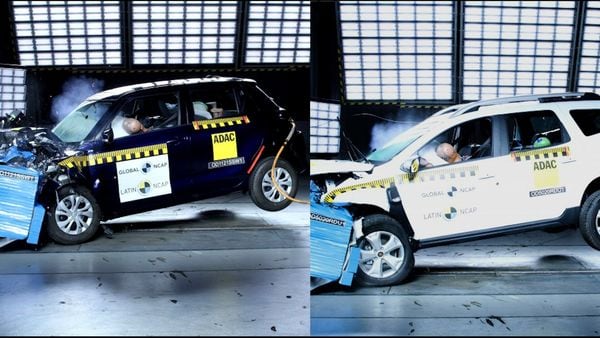 Swift hatchback, one of Maruti Suzuki's most popular cars, and the recently launched Duster SUV from the French auto giant Renault have failed in a recent crash test conducted by Latin NCAP, the South American associate of the Global NCAP.

Both Swift and Duster crash tests were conducted under the agency's New Car Assessment Programme for Latin America and the Caribbean. Both cars returned with a disappointing zero stars after the crash tests.

The Made-in-India Suzuki Swift, which is also manufactured in Japan, was equipped with two airbags as standard. The Swift used for the crash test faired poorly in almost all categories. It scored 15.53% in Adult Occupant box, 0% in Child Occupant box, 66.07% in Pedestrian Protection and Vulnerable Road Users box and 6.98% in Safety Assist box.

Latin NCAP said that the crash test result of the Swift is not only valid for the hatchback, but its sedan versions as well.

The agency said that the disappointing crash test result for Swift was due to ‘poor side impact protection, an open door during the test and low whiplash score due to the lack of UN32 prove for rear impact test’. According to the agency, Swift hatchback lacks standard side head protection airbags, standard ESC. Latin NCAP said that the Swift will not pass Regulation UN95 requirements due to door opening.

Renault Duster models used for the crash test had dual airbags and ESC as standard. It achieved 29.47% in Adult Occupant box, 22.93% in Child Occupant box, 50.79% in Pedestrian Protection and Vulnerable Road Users box and 34.88% in Safety Assist box.

Alejandro Furas, Secretary General of Latin NCAP said, "It is disappointing and upsetting such poor safety performances offered by Renault and Suzuki to Latin American consumers. Latin NCAP calls and encourages Renault and Suzuki to dramatically improve these models standard safety very soon. These safety features act like vaccines for one of the most severe pandemics like road traffic injuries and fatalities. Consumers have the right to receive the same vaccine supplied anywhere else without having to pay more for it."

Incidentally, Global NCAP had rated Swift with 2 stars when it was tested back in 2018, months after the new generation model was introduced in India. The Swift sold in the country comes with dual airbags as standard. However, the model sold in Europe is equipped with 6 airbags and Electronic Stability Control (ESC) as standard. Suzuki does not offer the model with side body and head airbags or ESC as standard in Latin America.