This armoured SUV can survive assault rifles and grenade attacks

Recently, the company had introduced the BR6 protected long-wheelbase Lincoln Navigator SUV.
By : Sabyasachi Dasgupta
| Updated on: 19 May 2020, 01:08 PM Canadian studio Inkas, which specialises in the construction of armoured vehicles, has revealed a bulletproof variation of the updated Infiniti QX80 SUV. It is an armoured car with ballistic protection according to the BR6 standard was made from an SUV without removing the luxurious four-seater saloon.

The base of the new armoured SUV from the Toronto-based company is a restyled Infiniti QX80 with a gasoline 5.6-liter atmospheric V8 with a return of 400 hp. An ordinary person is unlikely to be able to distinguish a protected SUV from the standard QX80: only thickened glasses can give away the difference.

Inkas engineers had to turn the interior into a capsule so that the armoured Infiniti QX80 could withstand the shelling of 7.62 caliber bullets from an assault rifle or Kalashnikov assault rifle, and also withstand simultaneous explosions of two DM51 hand grenades.

Inkas did not reveal the weight of the armoured QX80, but said that the suspension and hinges of the doors were stronger to withstand the increased load, the brakes are more powerful and there is additional protection for the electronics, battery and unit. The SUV also gets special tires. 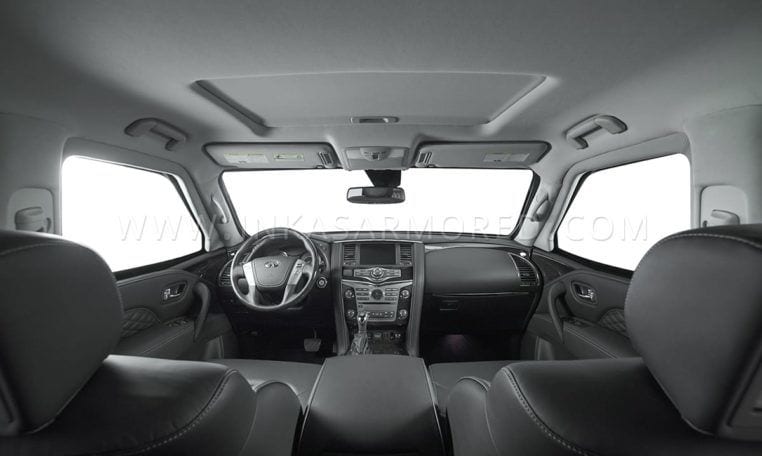 The interior of the armoured car has a four-seater layout. (Photo courtesy: inkasarmored.com)

The interior of the armoured car has a four-seater layout. The interior is decorated with black leather and wood, there are monitors in the head restraints of the front seats.

The company did not disclose the price tag of the protected Infiniti, but there are no bulletproof options with budget options, so an armoured car is at least twice as expensive as the top variant QX80. In the USA, the maximum-equipped QX80 costs about 91.5 thousand dollars, which means that the cost of a protected SUV exceeds the mark of 200 thousand dollars.