The Stinger's main claim to fame is how it marries looks with performance and luxury and there is a whole lot happening on that first count in the updated version.
By : HT Auto Desk
| Updated on: 12 Aug 2020, 04:34 PM 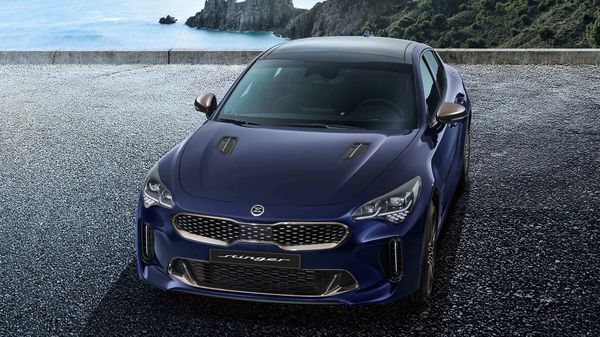 Kia Stinger gets even more menacing design upgrades in its latest version.

Kia cars are known to make the loudest statement through visual cues and the Stinger has been widely appreciated for its striking looks for quite some time now. The appreciation may increase manifold now as the Korean car maker revealed the updated looks with significant changes - both on the outside as well as in the cabin.

The Stinger's main claim to fame is how it marries looks with performance and luxury and there is a whole lot happening on that first count in the updated version. With a focus on amplifying its gran turismo character, Kia designers have incorporated a new multifaceted reflector LED head light which flank the trademark 'tiger-nose' grille at the front. These head lights are now even sleeker to accentuate the menacing appeal of the car.

Over at the rear, the upgrades are highlighted by new combination tail lights with a new light signature which stretches across the rear profile and mimics the visual cue of a spoiler. The new turn signals comprise a collection of 10 individual LED units each, arranged in a grid pattern to mimic the appearance of a checkered flag.

Inside the cabin, there is much to take in as well with the steering getting a new metallic finish at the bottom, frameless rear-view mirrors and - depending on the specification, contrast stitching on the dash and doors. Kia's upgraded 10.25-inch infotainment screen is accented by a new glossy black finish along the front of the dash. The cabin also features a new mood lighting system.

Kia promised an even more premium and upmarket feel inside the new Stinger.

The Stinger is available in several western markets and has the potential of revving the Indian market as well, if and when launched. Sedans - of most forms and capabilities, are losing ground to SUVs here and the Stinger could well be the shot in the arm needed. In India, Kia has two offerings - Seltos and Carnival, and is gearing up to launch Sonet sub-compact SUV soon.