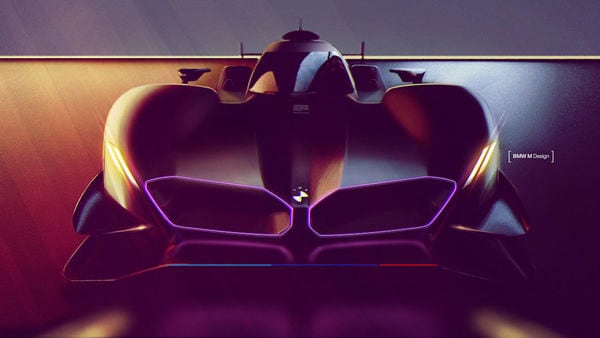 Hypercars are aspirational products for consumers. Not only that, they are emotional and aspirational projects for the automakers as well. Luxury car brands often invest a large sum of money in hypercar projects. German luxury car marquee BMW has taken one such project, which would spawn out an LMDh prototype racing car.

The automaker has teased the LMDh prototype race car with an official rendering, giving us a clear idea how the hypercar is going to look like. The teaser image comes in line with BMW's announcement of the return of prototype racing earlier this year.

The rendering shows the race car in a highly aggressive stance with BMW's signature large kidney grilles at the front. It is not sure what would be the functioning role of this kidney grille. It could be a part of the flow-through aero package or feed the massive radiators hidden from view. The rest of the prototype looks dramatic with huge, raised fenders and a narrow centre cockpit.

BMW is yet to reveal the rear profile of the race car. Overall, it can be said that BMW will give this hypercar a look in line with the new M division road cars. The automaker takes cue for this prototype's design from the BMW V12 LMR. The BMW V12 LMR had a miniature kidney grille, round headlamps and the same lines as classic race cars. The new prototype uses sleek slanted LED stripes. The car also gets sharp creases and a fluid overall appearance that is stylish and aerodynamic at the same time.

The German luxury car brand is expected to unveil the production model of this prototype sometime later next year and it would hit the race track sometime in 2023.