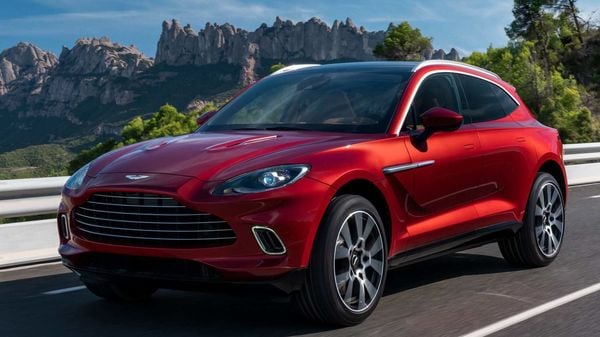 Aston Martin's first-ever SUV, the DBX, has been launched in the Indian market at ₹3.82 crore (base price, ex-showroom). Only 11 units of the SUV have been allotted for the market here in 2021. The DBX will lock horns with super-SUVs such as Lamborghini Urus and Audi RS Q8, here.

The Aston Martin DBX is powered by a 4-litre, twin-turbo V8 engine sourced from Mercedes-AMG, that produces an output of 550 PS of power and 700 Nm of torque. The SUV can sprint from 0-100 kph in 4.5 seconds and has a top speed in excess of 291 kmph.

The V8 engine is paired to a nine-speed torque converter automatic gearbox. The engine also features cylinder deactivation technology that shuts off one bank of cylinders at low speeds.

The DBX gets a wide grille that stretches across the front of the vehicle, and frameless doors blend seamlessly into the sides, elongating the look of the car. The SUV weighs a little more than 5,000 pounds, less than a Bentley Continental GT. The rear features a twin-exhaust system incorporated into the bumper while the roof-mounted spoiler, linked LED tail-lights and the signature ducktail-style boot lid spoiler complete the look.

On the inside, the seats are trimmed in full-grain leather sourced from long-term Aston partner Bridge of Weir. There is 10.25-inch touchscreen in the center console while a 12.3-inch touchscreen sits in front of the driver. Apple CarPlay comes standard as does a 360-degree camera system and ambient lighting that offers 64 different colors in two zones. The DBX has a 632-litre boot space and the rear seat can be folded in the 40:20:40 split for more space.