Hyundai has already launched the facelift version of the new Creta in Russia and is in process to drive it in China soon. India may have to wait a bit longer to see the 2022 Creta hit its shores.
By : HT Auto Desk
| Updated on: 12 Aug 2021, 16:00 PM 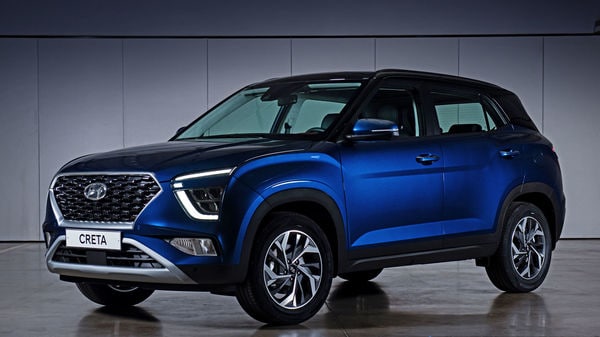 2022 Hyundai Creta SUV, which is also known as Crete in Brazil, will be launched on August 25.

Hyundai is all set to drive in the 2022 Creta SUV in Brazil later this month. The Korean carmaker will launch the facelift version of the popular compact SUV in the South American country on August 25.

The new Creta SUV, or Crete as it's known in Brazilian markets, will have a few design tweaks which makes it appear a lot more premium than the versions currently on sale in India. One of the biggest noticeable changes is in the redesigned grille, which now gets similar effect found on the recently launched Hyundai Alcazar three-row SUV.

2022 Creta SUV was launched in the Russian markets earlier this year. It was also seen testing in a camouflage on the roads of China recently, hinting at its imminent launch in the Asian markets. For Brazil, this will be the second generation of the compact SUV since its arrival in 2016.

Besides the front face of the new Creta, there are hardly any more visible changes on the facelift version of the SUV. The teaser released by Hyundai in Brazil shows similar headlight and taillight, alloy wheels and other exterior characteristics already seen in the Indian version.

On the inside, there is not much change in the facelift Creta. For the Brazil version, Hyundai has added a sunroof and digital panel among others in the SUV. It will be the same 10.25-inch touchscreen infotainment system along with the 7-inch digital driver display seen inside Creta in India, that will dominate the dashboard.

As far as safety features are concerned, the new Creta is likely to get the ADAS, electronic parking brake, lane assist, adaptive cruise control, blind spot monitor with camera like one can see on the Hyundai Alcazar.

The facelift version of the Hyundai Creta is likely to be powered by a 1.0-litre three-cylinder turbocharged petrol engine and a 2.0-litre naturally aspirated engine. Bothe engines are likely to be mated to either a six-speed manual or an automatic transmission. The smaller turbocharged unit is capable of churning out 121 hp of maximum power and a peak torque of 172 Nm. The bigger 2-litre unit is capable of producing 168 hp of power and peak torque of 201 Nm.