Toyota Urban Cruiser Hyryder is looking at taking the mid-size SUV segment in India by storm but it is an audacious ambition to have. Does the Hyryder deliver?
By : Shubhodeep Chakravarty
| Updated on: 06 Sep 2022, 08:56 AM
Toyota Urban Cruiser Hyryder will be available in E, S, G and V trims. Strong hybrid technology will be available on the top three trims.
View all Images

2/8
At the front, the Toyota Urban Cruiser Hyryder comes with a wide trapezoidal lower grille and a flowing crystal upper grille. It also has LED projector headlights and twin LED DRLs that also perform as turn indicators.

3/8
The rear-end of the new Toyota Urban Cruiser Hyryder has a sportier look. It features split LED tail light units, chrome garnish on the trunk and high-placed brake light.

6/8
The interior of the Toyota Urban Cruiser Hyryder offers nine-inch infotainment screen which displays AV and navigation information, vehicle stats and battery-engine energy flow among others.

8/8
Under the hood, the Toyota Urban Cruiser Hyryder comes with a 1.5-litre petrol motor that puts out 115 hp of power and 122 Nm of torque. The engine has been paired to an e-drive or E-CVT automatic transmission box. There is also a 177.6V battery that claims to provide a mileage of over 27 kmpl.

Toyota manufactures some of the best SUVs anywhere in the world. Period. Some of its models are so popular and such is the cult status that in few markets, the brand had to make customers sign on a dotted line saying they won't sell their purchases in the pre-owned market before a certain period of time. Here in India, the Fortuner may be no Land Cruiser but the ageless wonder has stood the test of time and remains a prolific seller along with the Innova Crysta. But go segments lower down and Toyota Kirloskar Motor has been unable to crack the code in the market here. The Yaris was an utter failure while the Urban Cruiser sub-compact SUV - for all its strengths - is a fringe player at best. And the Japanese appear to have had just about enough silently watching the smaller SUV space grow exponentially and as such, is now ready and raring with its Urban Cruiser Hyryder mid-size SUV model.

Is Toyota late to the mid-size SUV boom party? Yes, quite obviously. Is there still room for the taking? Yes, and obviously again. The segment may have a mile-long list of competitors and some very credible heavyweights but demand continues to grow and a new challenger with the right attitude could potentially turn the game on its head.

The Urban Cruiser Hyrder has a strong lineage but does it have the right attitude to not just challenge existing players but bring them down? Here's our first-drive review of Toyota Urban Cruiser Hyryder:

No other manufacturer in the mid-size SUV space currently offers hybrid powertrain. Maruti Suzuki Grand Vitara - launch expected next month - will be only the second and this is because this and the Hyryder have been jointly developed by Toyota and Suzuki. But unlike Glanza and Urban Cruiser which are rebadged Maruti Suzuki models, Hyryder is the first car from the TKM camp that will be rebadged of sorts by Maruti.

On its own merit, the Hyryder seeks to offer the same degree of robust and confident drive traits that have long defined Toyota SUVs. Under the hood is a 1.5-litre petrol motor which puts out a total of 115 hp and offers 122 Nm of torque. The engine is mated to an e-Drive - or E-CVT - automatic transmission box. And then there's the 177.6V battery which helps the vehicle achieve a claimed mileage of over 27 kmpl. During our test drive of around 150 kms - with air-conditioning on, frequent hard accelerations and stationery shoots - we registered a mileage of 22 kmpl.

The seamless shifts between battery and engine power goes a long way to ensure the Hyryder can indeed go a long way before needing a pit stop for fuel.

As for the drive itself, the Hyryder strong hybrid has a mature nature on the move. The hybrid technology, of course, is a big boon with the car starting on electric power - and mighty silently - before the engine takes over in tandem with the battery. At high speeds, it is the engine alone that takes over the entire workload.

The Hyryder has a linear progression towards moderate and high speeds, and while it may not be the most enthusiastic SUV around, once one goes past triple-digit speeds, it assumes a more eager nature. Overtaking would require some degree of planning even if the transmission slots the right numbers at all times. But when compared to some of its turbo-engine-powered Korean or German rivals, the Toyota model isn't going to be rated as much too thrilling, even when the power mode is engaged.

For those who may not be interested in flooring a vehicle every single time, the Hyryder has much good to offer. A well-balanced steering wheel offers just the right blend of flexibility to manage city traffic and offer feedback at high speeds, a typically well-engineered suspension to take on potholes and a high degree of turn precision as well as straight-line stability - the Hyryder stamps its credentials as a Toyota indeed. There's respectable amount of control on ambient and road noise while body roll isn't a deal breaker either.

The Hyryder is perfectly suited for the everyday commute and for the occasional highway journeys even if it isn't going to win accolades for its exuberance. And while there is an all-wheel drive option, it is only available in the non-hybrid variants.

A large part of Hyryder's strength lies in the fact that it seeks to offer as much to the person behind the wheel as it does to all other passengers. The strong hybrid variants come with brown-black upholstery colours while the non hybrids get an all-black colour theme. 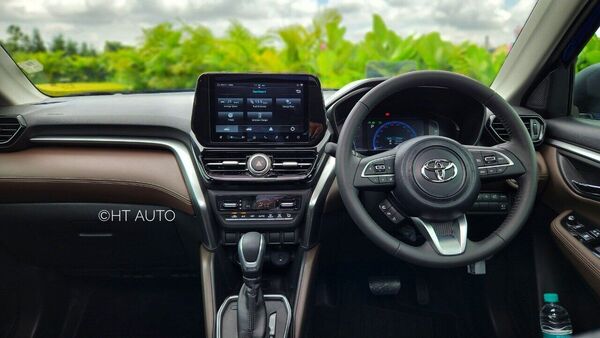 A look at the dashboard layout inside the strong hybrid trim of the Toyota Urban Cruiser Hyryder.

What's common though is a nine-inch free-standing infotainment screen that has been plucked straight out from the Maruti Suzuki camp. It is moderately bright, displays AV and navigation information apart from displaying vehicle stats and battery-engine energy flow, and while it does attract a fair amount of fingerprint, there's not much glare on it.

The model also gets the usual fare of an all-digital driver display, steering-mounted controls, cruise control option and Tyre-Pressure Monitoring System. Paddle shifters come only on the automatic set up in the non-hybrid versions of the vehicle.

The Hyryder also comes with a Head-Up Display (HUD) and Surround-View cameras - again, taken straight from the newer Maruti Suzuki vehicles like Baleno and Vitara Brezza. Even the layered dashboard is similar and while the upper portion is made entirely of hard plastics, there is also generous use of leatherette materials on the lower half and on the doors for a premium touch.

With regards to other feature highlights, the Hyryder is equipped with front ventilated seats, wireless phone charging, a 12V socket and a USB Type A socket just above the center console and a massive two-layered sunroof which can be opened almost entirely at the press of a button. The notable misses in this list are cooled glovebox, air purification system and ambient lighting which is only available in the non-hybrid variants.

As far as space is concerned, it is a mixed bag of sorts. All seats have a slightly rigid feel but this ought to be great for much-needed support on long journeys. The rear-seat recline feature is great and there's decent space for passengers at the back although shoulder-room for three is likely to be an issue.

What's a big issue is that because of the battery pack towards the rear under-side of the vehicle, boot space is significantly compromised. This is not just a chink in Hyryder's armour but the case with almost all hybrids. While one big suitcase and a handbag will find the cargo area to be cozy enough, multiple bags for multiple road trips would eventually make a roof carrier necessary.

Overall, the cabin isn't exactly radical for an entirely new model but still gets a fair share of modern-age features and a comfortable cabin.

The Hyryder makes its biggest statement through its exterior visual styling. This Toyota is a looker. And it knows.

Not only is the Hyryder a distinctive to look at within the Toyota product portfolio in the country, it is more than likely to stand out among rivals as well. The LED projector headlights, the twin LED DRLs that double up as turn indicators, the wide trapezoidal lower grille and a flowing crystal upper grille gives the SUV a very cutting-edge face.

From the side, the Hyryder gets squared-wheel arches over the 17-inch alloy wheels, a stretched chrome line under the windows, minimalist body lines and moderately large glass area on the windows.

Over at the rear, the styling is once again on the sportier side, complete with the split LED tail light units, chrome garnish on the trunk and a high-placed brake light. The rear bumper too has a raised stance.

The Hyryder is being offered in seven mono-tone body colour options as well as four dual-tone hues.

Urban Cruiser Hyryder from Toyota has a serious advantage over almost all of its rivals when it comes to the hybrid powertrain. For anyone who has lengthy commutes on a regular basis. It may not exactly be the most eager of SUVs to drive but ticks almost all other boxes right. Backed by a robust and time-tested service network of Toyota, this model could well be the third that completes the troika of success for the brand, along with Innova Crysta and Fortuner.

The above price is indicative and for the base, non-hybrid variant. The official launch of the Toyota Urban Cruiser Hyryder is expected early next week which is when the entire price structure would be confirmed.