Tata Altroz finally gets an automatic option with the dual-clutch transmission making its way in. But does it do justice to the solid nature of the premium hatchback?
By : Shubhodeep Chakravarty
| Updated on: 04 Apr 2022, 05:28 PM 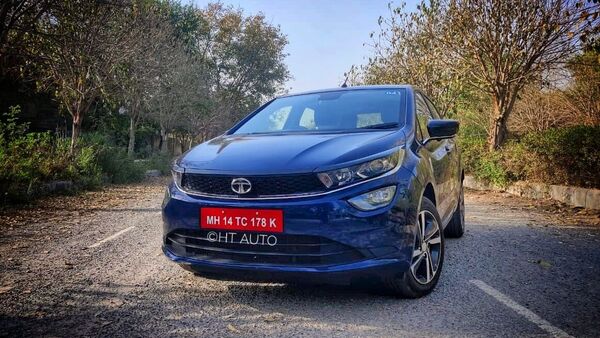 Tata Altroz continues to have a stylish exterior profile which is now further enhanced by a svelte blue body paint.

Tata Altroz has been a solid performer in the premium hatchback segment since its first launch in the country in 2019. It is the newest in its segment which has some very capable rivals led by Maruti Suzuki Baleno and Hyundai i20 but despite the challenge it has had to mount, Altroz has emerged as a power player rather than a third cog in the proverbial wheel. Stylish looks, premium cabin, great built quality - the strengths are aplenty.

But what has been missing is an automatic transmission option that is increasingly finding favour among buyers, especially in urban pockets of the country. Well, not anymore because Tata has now equipped Altroz with the dual-clutch technology (DCT) which, at least on paper, promises not just convenience but a spirited drive. The company refers to the transmission as Dual-Clutch Automatic (DCA) and it boasts of several key highlights like a wet clutch, active cooling technology and a 'Self Healing' system which promise to enhance the life of the gearbox while also bringing down maintenance cost. So far so good but how does all of it come together to help Altroz when out and about - within city limits and even beyond? 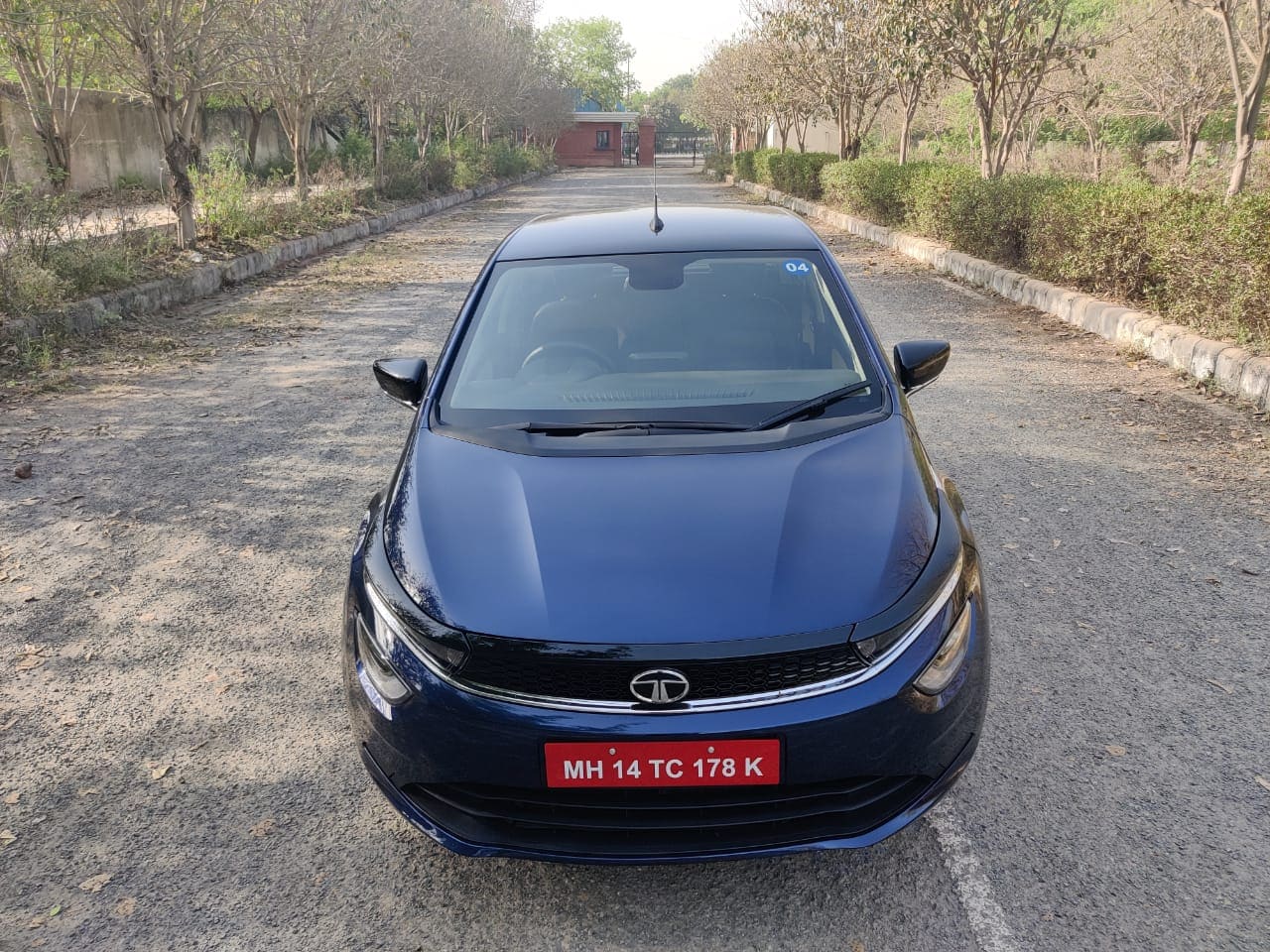 Tata Altroz competes against the likes of Maruti Suzuki Baleno, Hyundai i20 and Honda Jazz in the Indian car market. (HT Auto Photo)

Here's a drive review of the new Tata Altroz DCA:

Now before I elaborate on my key takeaway from Altroz DCA drive performance, it is perhaps best to explain, theoritically, the highlights of some of the key features that the transmission unit offers.

Wet Clutch with Active Cooling Technology - Tata Motors claims that because of our country's extreme weather conditions, this technology is able to monitor oil temperature at 100 times per second to ensure the vehicle adapts to the challenges at hand.

Shift by Wire Technology - By removing the use of shifter cables, the DCA unit claims to quicken gear change times to 250 milliseconds per shift. The focus is on a smoother yet sportier drive performance. 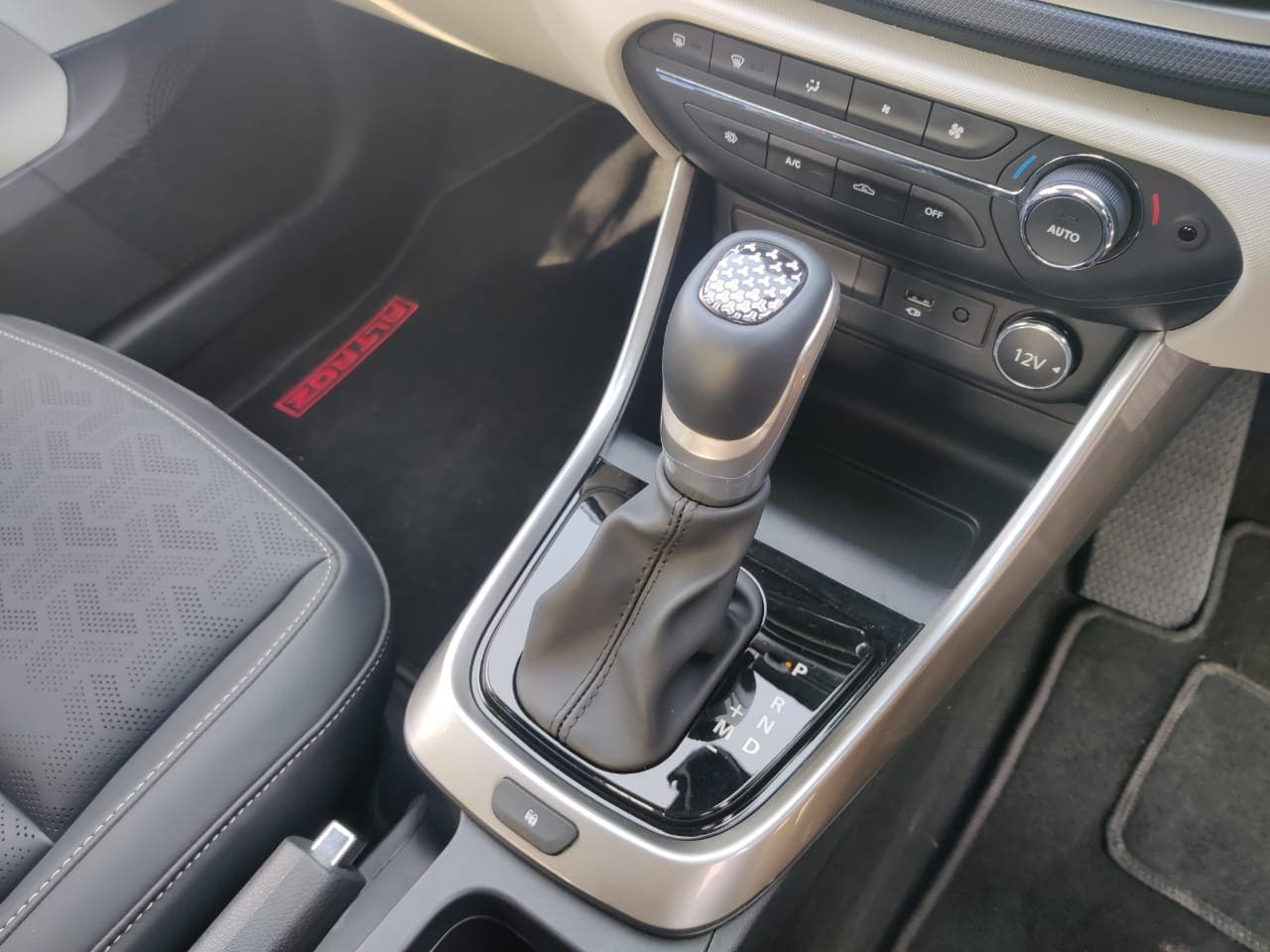 The option of having a Sports mode on the Altroz DCA could have helped the car strike a chord with more enthusiastic drivers. (HT Auto Photo)

Self-Healing Mechanism - The technology allows for 'evacuating' dust and debris which may otherwise prevent the smooth operation of the gear shift over a long period.

Now that these three are briefly explained, I quite looked forward to my day out with the Altroz DCA. The day, eventually, turned out to be a mixed bag of sorts. The transmission unit comes mated to the familiar 1.2-litre naturally-aspirated motor that puts out 86 hp and offers 113 Nm of torque. Start the Altroz and slot the gear lever to 'D' and the car gets a move on with a steady demeanour all around. In fact, the steady nature of the up shifts are quite reassuring and so is shifting back to lower gear ratios. There is minimal lag and the DCA lulls you into thinking that it is every bit as refined as it is made out to be.

But while it indeed is quite mature, sophisticated even, the shortcomings begin to appear as soon as you go a little heavy with the throttle inputs. Most of what I mentioned above as strengths take a slight to moderate beating when there is a need to hunt for some speed, and the 1.2-litre motor takes its own, not-so-sweet - time to get the power going. And this is where you may be left wondering if it would have been a better idea to have used the much-touted DCA unit on the turbo engine of the Altroz instead.

Within city limits, especially during peak office traffic hours, one may hardly miss the spirited nature that the Altroz otherwise has. But out on open highways, building up to triple digit speeds will require some labour, overtaking will require some more planning. Reach the top rev though, near or past three-figure speed mark, and the hatchback resumes its reassuring guise.

Fortunately though, the inherent strengths of the Altroz remain as is. The car remains steady at high speeds and dives into corners with confident determination. There is a heft all around the Altroz that you won't find in the Baleno or even the i20, and that is quite reassuring. The suspension set up remains slightly firm which allows for the car to embrace speedbreakers more than glide over them.

Add to all of this the fact that Altroz is also a rather spacious car and the package remains one of worth.

The Altroz DCA has an identical cabin to of the standard Altroz, which - barring a few factors - still works in favour of the model. While rear-seat space and comfort remains quite good, the layout of the dashboard continues to speak volumes of the distance Tata Motors has come from the erstwhile days of Indica. The layered dash with its interplay of colours and textures gives the cabin an upmarket appearance while well-bolstered seats and storage spaces all around enhance the long-drive strength as well. The semi-digital driver display remains as is, and so does the seven-inch main display screen. Now it is this screen that I feel could have done with an update in terms of dimensions even if remains ever as responsive to touch. There is also no sunroof which is a feature I may not be a fan of but is sought-after by buyers across segments. 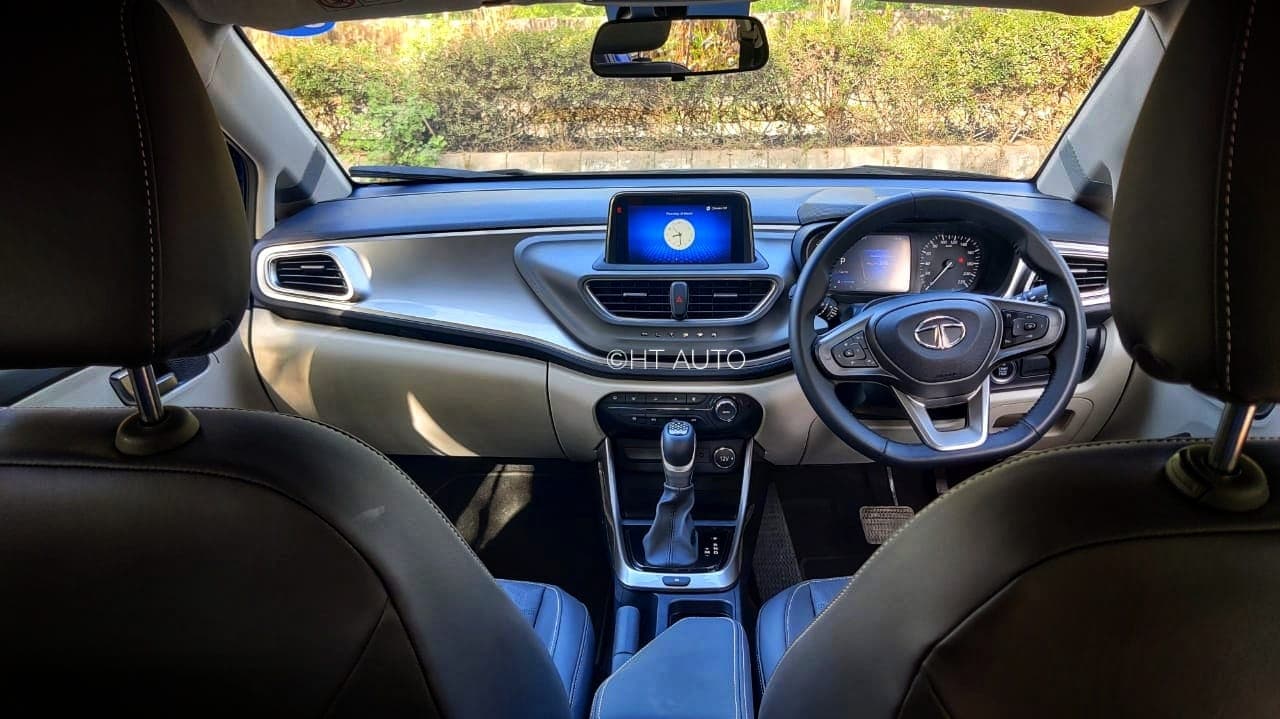 Altroz continues to benefit from a premium and spacious cabin even if the infotainment screen now appears a tad bit too small. (HT Auto Photo)

Much like the cabin, the Altroz DCA has an exterior that is also identical to the standard model barring the DCA badge at the rear and the Opera Blue colour theme which lends the otherwise sporty visual a touch of elegance. 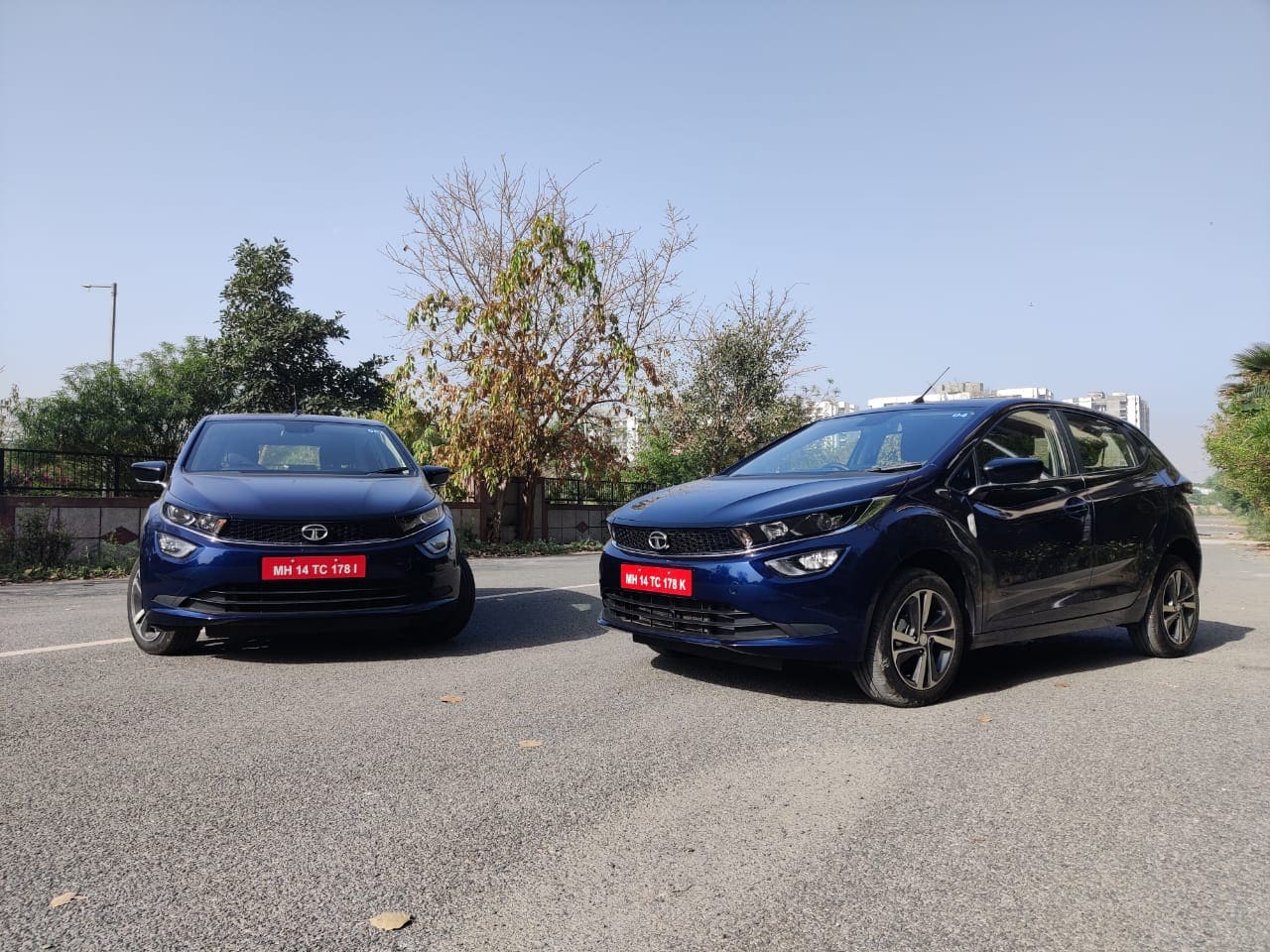 Tata Altroz is leaving no stone unturned in its battle to have a bigger say in the premium hatchback space. (HT Auto Photo)

The sweeping head light units, the sharp bonnet, the squat-like stance - all of these make the Altroz a catchy hatchback that is more than likely to still turn heads. With 365 litres of boot space and 90-degree opening angle of all doors, it is a car that is also designed for practicality.

The Altroz is a great option if you are out in the market for a premium hatchback. It isn't exactly a hot hatch but it plays to its strengths well. A spacious cabin, modern design language and a robust build are some of its biggest advantages over rivals.

As for the latest transmission option, it is a bit of a hit and miss. If you are gung-ho about Altroz and have always wanted the convenience of an automatic, the DCA is a worthy option. And don't forget that this here has a five-star crash test rating from Global NCAP. But be aware that what you gain in terms of convenience may also be something that leaves you desiring for a bit more sportiness.