The latest Brezza is the best-ever Brezza from Maruti Suzuki with design updates and feature upgrades helping it stand out. But it is also quite pricey.
By : Shubhodeep Chakravarty
| Updated on: 07 Jul 2022, 09:41 AM 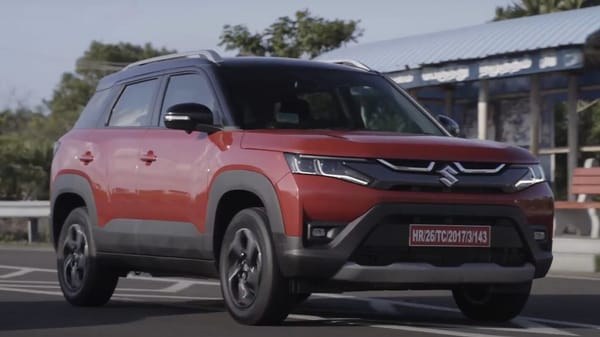 The latest Maruti Suzuki Brezza has received close to 50,000 bookings in the weeks since reservation window was opened.

Once upon a time, Maruti Suzuki had this bright idea of developing and offering a sub-four-meter vehicle which had pronounced visual SUV traits. Showcased at the bi-annual Auto Expo, the product became an instant hit and despite the fact that Vitara Brezza at the time was only offered with a diesel engine option, the reception to it was phenomenal. Vitara Brezza is often credited as the sub-compact SUV that really ignited the barrage of newer entrants into the Indian car market, most notably Tata Nexon in 2017, Hyundai Venue in 2019 and Kia Sonet in 2020. Time though is kind to no one and while Maruti Suzuki has sold over seven lakh units of Vitara Brezza, the absolute dominance has taken a hit.

To consolidate on its numbers and beat back challenge from newer rivals, Maruti Suzuki has now launched the updated Brezza minus the ‘Vitara’ name and complete with massive visual updates to the body and significant number of feature additions on the inside. Mechanically, nothing much has changed post the 2020 transplant to the 1.5-litre petrol motor although the auto transmission unit has been upgraded.

So does the once ageing veteran on the field now have enough firepower in the third innings of the match to lash out at and against rivals? With over 46,000 bookings and counting, it is a sure-footed start but much would depend on its real world strengths than on past laurels.

Here's the full first-drive review of the 2022 Maruti Suzuki Brezza:

The Vitara Brezza had started looking rather jaded in the ever-evolving segment of sub-compact SUVs. Part of the reason for this may fall on just how common the vehicle model is on Indian roads. The other part is the influx of newer, younger looking vehicles, some more stylish than others. 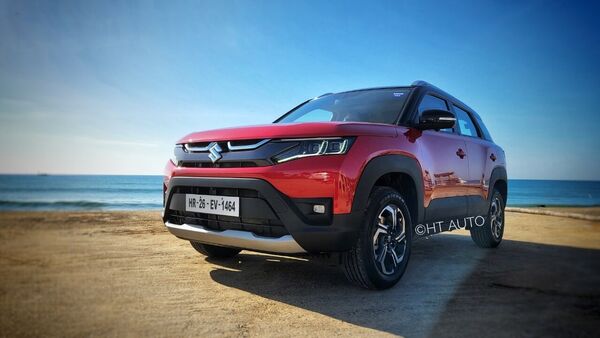 Maruti Suzuki Brezza has the same dimensions as the outgoing Vitara Brezza.

The latest Brezza though does a darn good job of playing the style game though and in its latest version, looks much younger than before. The visual updates are mostly cosmetic but the skillful touch with which the changes have been made give the model a simpler and cleaner - and yet appealing - look from all sides.

While the erstwhile Vitara Brezza looked rather sober, the newest Brezza clearly has the the stylized curves assimilated well with the overall SUV-ish profile of the body. Whether it is the flowing DRLs on the twin-pod projector head light units or the single-chunk chrome bar or the grille in gunmetal finish, the face of the model is now sportier than ever before. 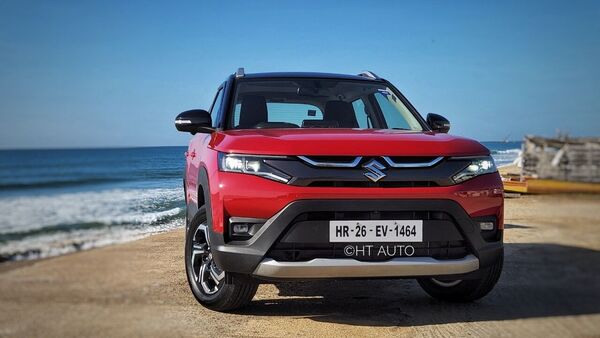 A look at the front profile of Maruti Suzuki Brezza.

From the side, Brezza goes the extra distance in underlining its SUV-ish credentials with a large black cladding around the wheel arches flowing prominently across the bottom of the two doors. Depending on personal preferences, this may appear machismo-like or an exercise in excess. But the 16-inch dual-tone alloy wheels sure looks really appealing and could corner attention all on their own.

But it is the rear that has been the best done in terms of design and looks the most contemporary. The solid chrome badge with the ‘Brezza’ embossing on the boot door has been done away with for a cleaner profile with the same model name lettering now as individual characters on top of the registration plate. The LED tail light design has also been completely changed and is now sleeker than ever before. 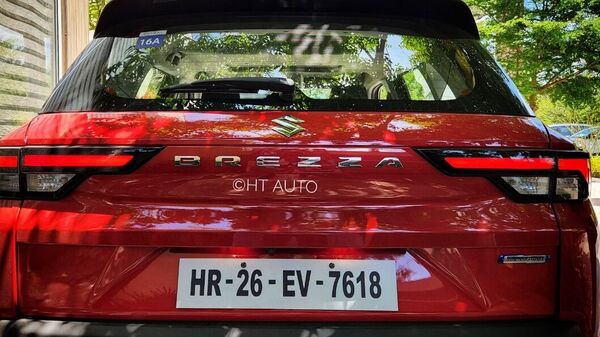 A look at the rear profile of Maruti Suzuki Brezza.

Overall, the newest Brezza is the best-designed model ever from Maruti Suzuki, a company that hasn't always had the best-looking models and has previously relied on appearances gaining acceptance through mass adoption and through passage of time. Remember Swift when it was first launched, or the Ritz? The 2022 Brezza though hits the nail on the head with its visual appeal echoing its fresher intent.

Open the doors and the cabin has much new to offer as well but unlike the exterior profile, not every update here is quite radical or even revolutionary. First things first, the Brezza is now the first car from the Maruti Suzuki stable to offer an electric sunroof. Customer preference for this feature addition has finally, phew, made Maruti take the dive although personally, I still don't see much point of a glass roof in Indian conditions. 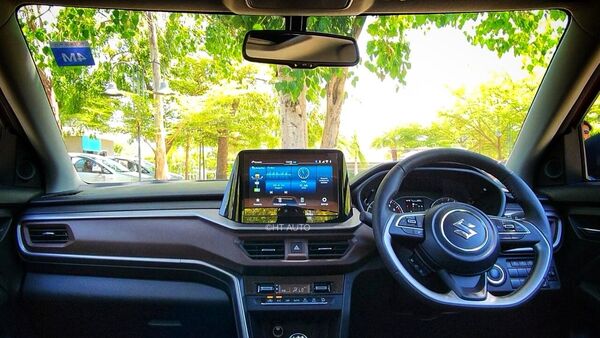 A look at the dashboard layout inside the new Maruti Suzuki Brezza.

Sticking with what's new, there's now ambient lighting inside the Brezza, 360-degree camera, a nine-inch main infotainment display that the company calls SmartPlay Pro+, a pop-out Head-Up Display, wireless phone charging, support for Android Auto and Apple CarPlay, and support for over 40 features via Suzuki SmartConnect mobile application. Almost all of these features were also seen on the updated Baleno model launched earlier this year and now makes the Brezza vehemently competitive against its rivals, some of whom have always had the edge in terms of features offered. Do note though that like with all other car models, almost every single feature mentioned above is available only in the top-of-the-line variant. 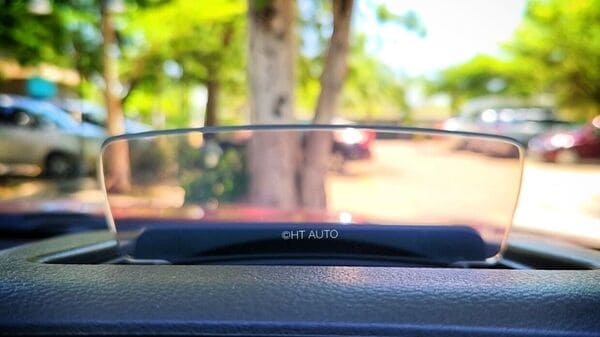 The Head-up Display inside the Brezza has been carried forward from the Baleno and is a unique feature offering in the segment.

But apart from the technology and features incorporated, the Brezza now also offers some cosmetic updates in the cabin in the form of layered dashboard with silver accents, more silver accents on the doors and more foam cushioning on the fabric seats. Space is still quite decent inside with rear passengers getting adequate amount of leg room, knee and shoulder room. There are rear AC vents and a charging point for convenience. Additionally, the top-end variants offer 60:40 rear-seat folding for customized cargo space. The boot as is still is at 328 litres, marginally less than the 350 litres inside Hyundai Venue.

One rather irritating encounter for us was how we had to slam the boot door shut every time we opened it for it to lock properly. This may be an issue on just our test model but we aren't entirely sure. Either way, this deserved a mention as it can be quite irritating to think the boot is shut and then for the door ajar alarm to sound once one gets the Brezza going.

But how well does the new Brezza get going?

Mechanically, not much has changed inside the new Brezza with Maruti coming out with a re-tuned 1.5-litre K-Series petrol motor which now has a mild-hybrid technology to marginally increase fuel efficiency figures.

The five-speed manual transmission unit has been carried forward but the four-speed automatic unit gets replaced by a six-speed torque convertor AT set up. If you opt for the manual transmission, there's not much new to look forward to and the Brezza retains its strong drive traits for the most parts. The gear box isn't the slickest but is still satiating enough to cater to most drive styles, Throttle inputs get the required response from the motor under the hood and the Brezza continues to build power and momentum in a mature fashion. Over the 3,000 RPM mark, there is a sense of urgency and the car assumes a more spirited stance. What this effectively means is that while Brezza continues to remain composed within city limits, it can be a responsive companion on highways with only marginal planning needed to make frequent overtaking moves. 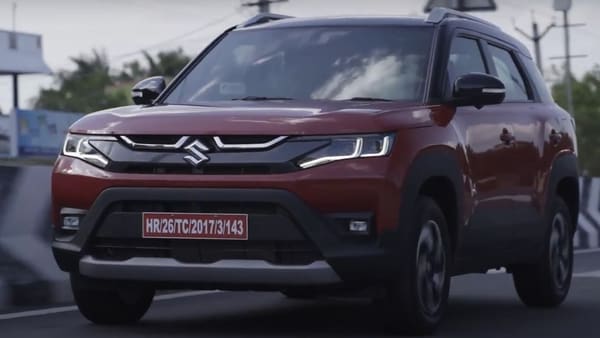 With a mature drive tuning, Brezza remains a familiar Maruti in its manual gearbox offering.

The suspension too remains a good ally with the Brezza typically unafraid to be thrown into, over and around road aberrations. High-speed cornering still effects some degree of body roll but the relatively well-weighted steering wheel is par for the course.

But while the manual gearbox compliments the engine well and makes for a pleasant or excitable drive depending on your mood rather than its own capability, the six-speed AT is just about satisfactory. It isn't anywhere close to as fluid as the DCT on the Venue or as mature as a CVT but is still a few steps ahead of the previous set up that was being offered. One can of course make use of the paddle shifters to slot the required number but even then, the Brezza AT is just about par for the course. 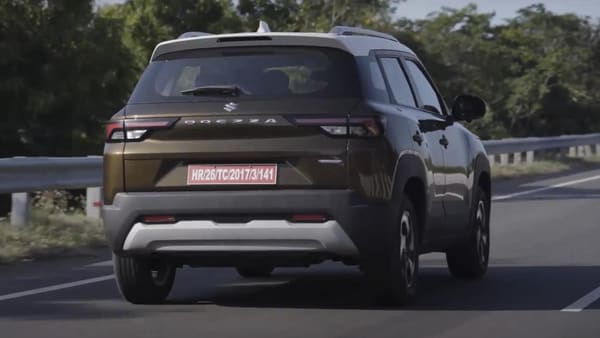 The AT inside Brezza has been updated and while it is satisfactory for daily city commutes, it is also rather mundane for those looking at a more eager drive experience.

If you are someone who would be driving the car within city limits for most parts, there is no denouncing the convenience of having an auto gearbox. But for those who have experienced a DCT or CVT on highways would surely come out rather unimpressed from the auto unit in the Brezza.

Maruti Suzuki has recognized the fact that the crown over Brezza's head may remain intact but may not have gleamed as much as it did back in yesteryears. The competition is massively stiff and most rivals are quite worthy in their own right. What is heartening to see though is that Maruti has not just relied on Brezza's strengths in the latest update but catered to evolved expectations in the segment as well. In this sense alone, the visual updates and feature additions are the two biggest strengths of 2022 Brezza.

The tweaked petrol motor too is still rather familiar and has a no-fuss nature about it. But it loses out on tax benefits that 1.2-litre engines or below attract which means the overall price structure of the Brezza is on the higher side. The top-variant is at ₹13.80 lakh (ex showroom) which makes it pricier than even the top-end diesel variants of Tata Nexon, Hyundai Venue and Kia Sonet. From playing the pricing game to now playing the feature game, Maruti has come a fair distance and is underlining the value proposition offered with the variant-wise pricing structure. How will the market respond? Time will tell.