With the new 2022 V-Strom SX, Suzuki Motorcycle India aims to penetrate the burgeoning entry-level ADV segment that includes already established rivals such as Royal Enfield Himalayan and KTM 250 Adventure.
By : Prashant Singh
| Updated on: 27 May 2022, 12:42 PM 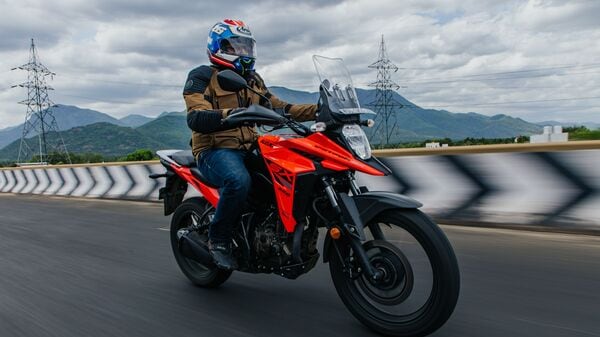 The new 2022 Suzuki V-Strom SX comes out as a direct rival to the popular Royal Enfield Himalayan.

The burgeoning adventure motorcycle segment is slowly becoming a favorite among two-wheeler OEMs as progressive trends and evolving Indian customers are looking to break free from traditional choices. Only recently Suzuki rolled out its new offering in the form of V-Strom SX in the quarter-litre ADV segment that is growing at a rapid pace. Well, Suzuki might not be the first to offer an entry-level dual-sport offering, but it took its time to roll out an opponent that might actually be worthy of carrying the legendary ‘V-Strom’ nameplate. Read on to know if the V-Strom SX is too little too late? Or if it's a proposition that strikes the right chords with the average Indian buyer? 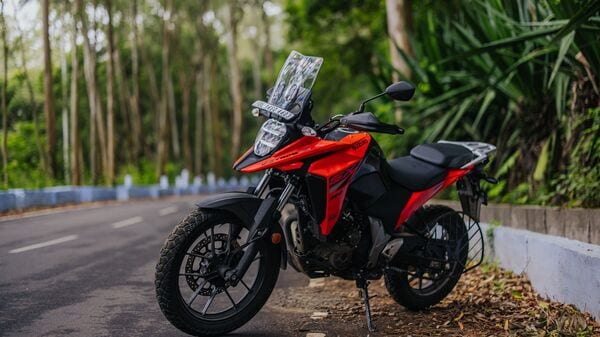 Suzuki might not be the first to offer an entry-level dual-sport offering, but it took its time to roll out an opponent that might actually be worthy of carrying the legendary V-Strom nameplate.

On the outside, the V-Strom SX appears to be anything but basic. The most striking exterior feature has to be its prominent beak that is reminiscent of the bigger displacement V-Strom models. Though the front headlamp screams ‘Gixxer’ the use of completely unique surrounding panels manages to make it distinctive. Also, there is a high-raised front clear windscreen that apart from adding to the looks is also functional at highway speeds.

Importantly, the panels' quality and fit, and finish on the model are satisfactory. And the use of dual-tone hard-touch plastics, as well as the sharper geometry of its aesthetics, make it look intriguing. However, the switchgear feels quite basic for a motorcycle that is being offered at quite a premium price tag. Though I strictly do not mean that the quality is compromised, the competition is offering much tacky and loaded switchgear with multiple functionalities. And the same is the case with its meter console which should have been a different, a more dedicated unit, perhaps coloured TFT screen to grab attention. 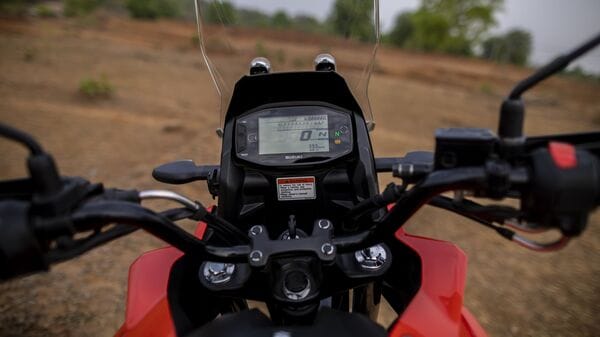 The switchgear as well as display feels quite basic for a motorcycle that is being offered at quite a premium price tag.

That said, the stance of the baby V-Strom is authentically adventurous. Higher positioned seating (835 mm) and raised ground clearance of 205 mm add to its credibility. Though it uses the same platform as the Gixxer 250 Twins, the rear subframe has been tweaked to prepare it for added weight from luggage on long tours. It also gets a cool-looking dedicated silver-finished luggage rack at the tail and a USB charging slot to make touring more convenient. It is not that the Gixxers aren't touring friendly, but V-Strom is supposed to be a step up. Also, the overall wheelbase has been increased by 100 mm to make it more stable for the highways. Overall the V-Strom SX looks imposing and purpose-built but how is it to ride? 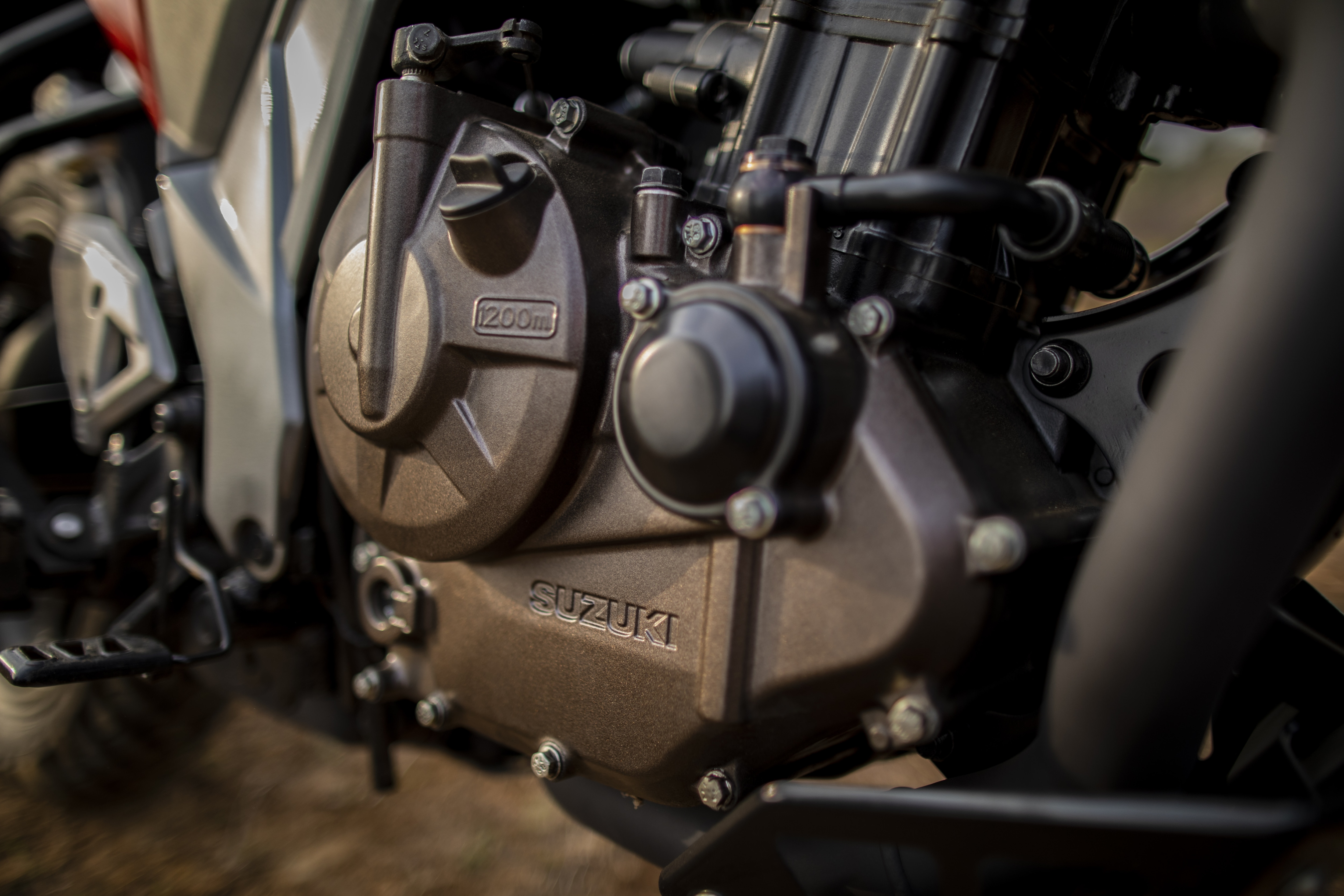 Suzuki V-Strom SX ends up using the exact same engine which is a 249 cc 4-stroke single-cyl oil-cooled engine as the Gixxer 250 Twins.

Parts sharing/development cost saving is apparent as the V-Strom SX ends up using the exact same engine which is a 249 cc 4-stroke single-cyl oil-cooled engine as the Gixxer 250 Twins - delivering 26.3 PS/22.2 Nm. Also, the engine hasn't been tweaked or re-tuned but borrowed exactly as it is. And the gearing hasn't been tinkered with so expect the same liner delivery from this motor with a smooth-shifting 6-speed transmission that is basically good for cruising on open roads. The liner characteristics of this smooth quarter-litre single make it a hoot to ride on open highways. Also, there is a decent push around the mid, as well as, high range which aids in cruising. But if you are expecting to play in the dirt and slide your way through muck and slush, you might have to use a bit more throttle than usual since torque takes some time to kick in. And parts sharing to this level has a cost.

However, crack the throttle open on the tarmac and you'll see V-Strom SX building speeds like a wild horse. The quick revving motor gives the bike a sporty character, so much so, that cruising at triple-digit speeds isn't an issue at all. You can also abuse the throttle but still, the engine manages to remain vibration-free and you can do it all day long without stressing this powertrain and all this is a sign of a good tourer. 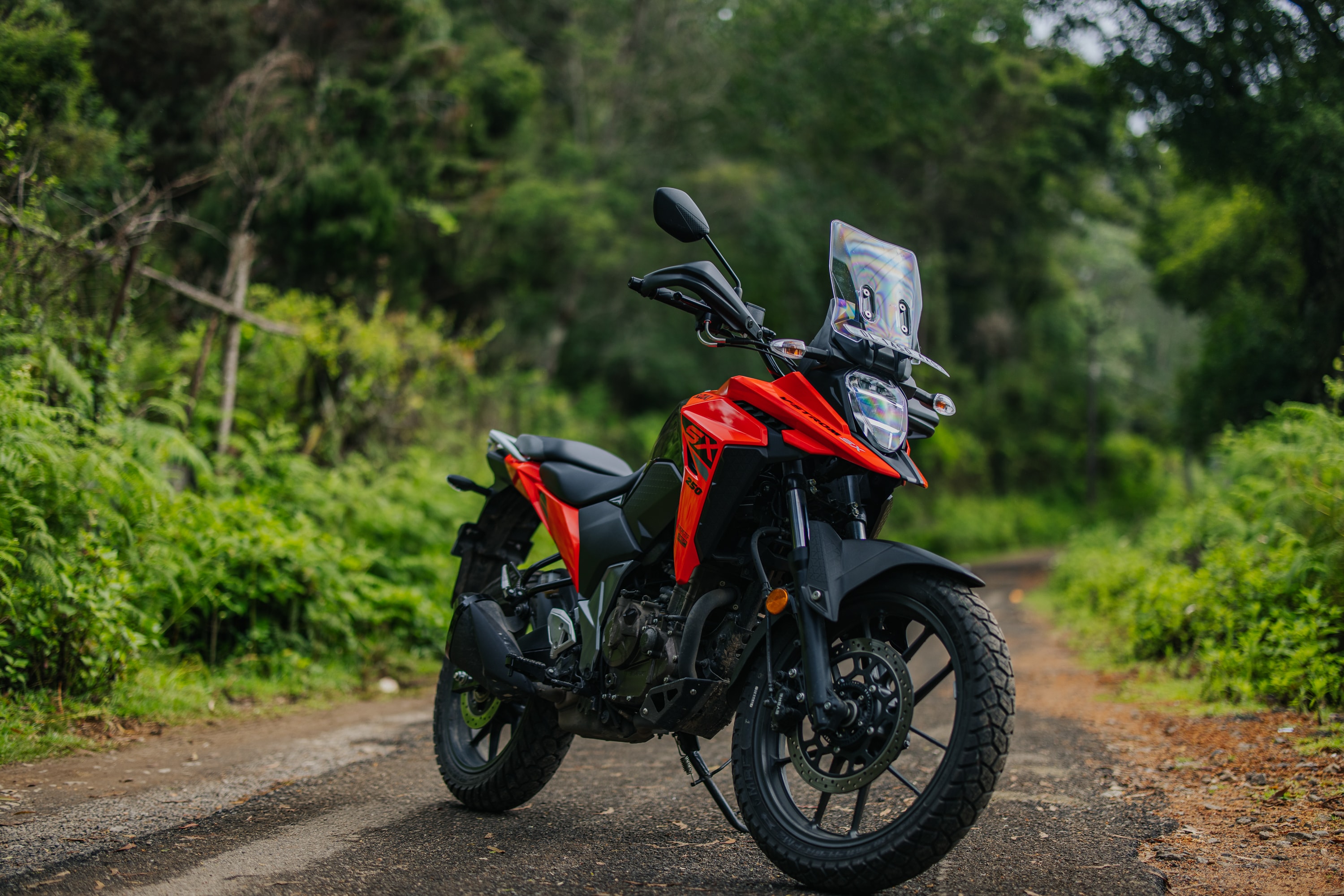 On the outside, the V-Strom SX appears to be anything but basic. The most striking exterior feature has to be its prominent beak that is reminiscent of the bigger displacement V-Strom models.

Suzuki's intent of making the V-Strom SX a purpose-built adventurer is evident. Swing your leg over and you'll feel like sitting higher than all other motorcyclists sharing space on the road. But at the same time, the bike isn't as heavy or demanding to ride, especially because of its low kerb weight of 167 kg which is just 6 kg over the fully faired Gixxer 250 SF. Low weight contributes to added confidence when taking it on roads less traveled and of course, it is also not tiring to drive around on jam-packed roads.

Fitted with a telescopic upfront and a 7-step adjustable monoshock at the rear, the V-Strom SX manages to simply glide over the majority of undulations on the roads. Also, you can feel the front fork working over undulations, absorbing bumps without transferring much to the rider, maintaining composure. However, I couldn't really push the bike around in the dirt as much due to limited time and most of my time was spent munching miles. Speaking of which, the split seating on the bike is wide and accommodates riders of all sizes well. However, it hasn't been kind to me on my highway ride as I kept on shifting weight from one side to another to keep my lower back from pain. Also, handlebar positioning isn't exactly as high as you'd find in other ADVs which makes it quite tricky to ride in a standing-up position. Since I assume the majority of taller riders would opt for the V-Strom because of its stance, the handle position might come out to be a kink in its shining armor. Albeit, once you stand up it is easy to notice that the positioning of the console is apt and it is fairly visible since it is placed slightly higher up against the regular bikes.

The V-Strom feels planted on the roads, even at triple-digit speeds and I quite fancy this stability. Even with the strongest crosswinds I've ever experienced on the highways, V-Strom kept on rolling without any fuss. And the difference was much evident for me since I came back from riding the Scram 411 only last month which was weaving like a serpentine during similar conditions. V-Strom not only manages to stay put on high speeds but it also remains fairly stable around the corners. The combination of 19" front and 17" rear supports its handling abilities and is a good balance between off-road and on-road riding. 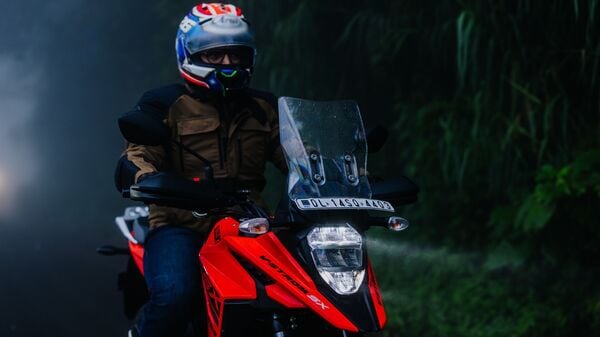 The V-Strom feels planted on the roads, even at triple-digit speeds and I quite fancy this stability. Even with the strongest crosswinds I've ever experienced on the highways, it kept on rolling without any fuss.

Suzuki isn't joking around with the iconic ‘V-Strom’ nameplate and the V-Strom SX is a purpose build adventurer that isn't demanding to ride. Though it manages to look apart with the striking high-raised stance and bright colours combination, it lacks X-Factor that can really outshine it against the competition. It is smartly put together using flesh and bones from Gixxer cousins, but only if Suzuki can give it better instrumentation and switchgear (perhaps riding modes), V-Strom SX can do wonders in terms of domestic sales because at the end of the day value is what matters the most to the Indian customers.