The latest Maruti Suzuki Baleno is the smartest-looking Baleno ever and packed with smart features, makes a great case for itself yet again in the premium hatchback segment.
By : Shubhodeep Chakravarty
| Updated on: 02 Mar 2022, 01:09 PM 2022 Baleno from Maruti Suzuki is once again targeting young and aspirational car buyers.

First launched for the Indian market back in 2015, Maruti Suzuki Baleno has quickly raced to become an enormously popular hatchback model here. Over the course of the the past several years, well over a million units of the Baleno have been sold and the car is a common sight on Indian roads, its popularity just refusing to buck in the face of the SUV trend. Compact yet relatively spacious, trendy looks and a capable engine under the hood have ensured that Baleno is not just able to take the fight to its rivals - some like the Hyundai i20 are quite popular in their own right, but even tackle sub-compact SUVs at similar price points with a confident sense of panache.

But while the Baleno has received numerous updates in the past seven years, the 2022 Baleno is where the largest gamut of changes are at. With an absolutely unwavering focus on style and features - two crucial factors deciding the fate of passenger vehicles in the country now, the latest Baleno is staking a claim to not just retain the crown but add a fresh coat of polish to it.

Are the updates superficial, more gimmicky in nature or is the 2022 Maruti Suzuki Baleno indeed ready to punch its weight in and beyond the ring?

Here's our first-drive review of the new Maruti Suzuki Baleno:

First things first, the latest Baleno is near identical to the model it replaces in terms of dimensions. The folks at Maruti say it is more aerodynamic but that's not really evident to the naked eye. But one has to be blind as a bat to not notice the slew of design updates that this car now sports for a more youthful appeal.

Take the front grille for instance. The Baleno thus far had a grille that, to me at least, resembled the mustache of Adolf Hitler. Ya, take a minute to check that out.

But the latest Baleno gets a wide front grille with chrome underline that spreads neatly to meet the projector LED headlights on either side. And if these head light units weren't smart looking as is, the three-element LED DRL structure lends it a rather futuristic appeal. The overall visual appeal of the Baleno's face is now sportier than it has ever been before. 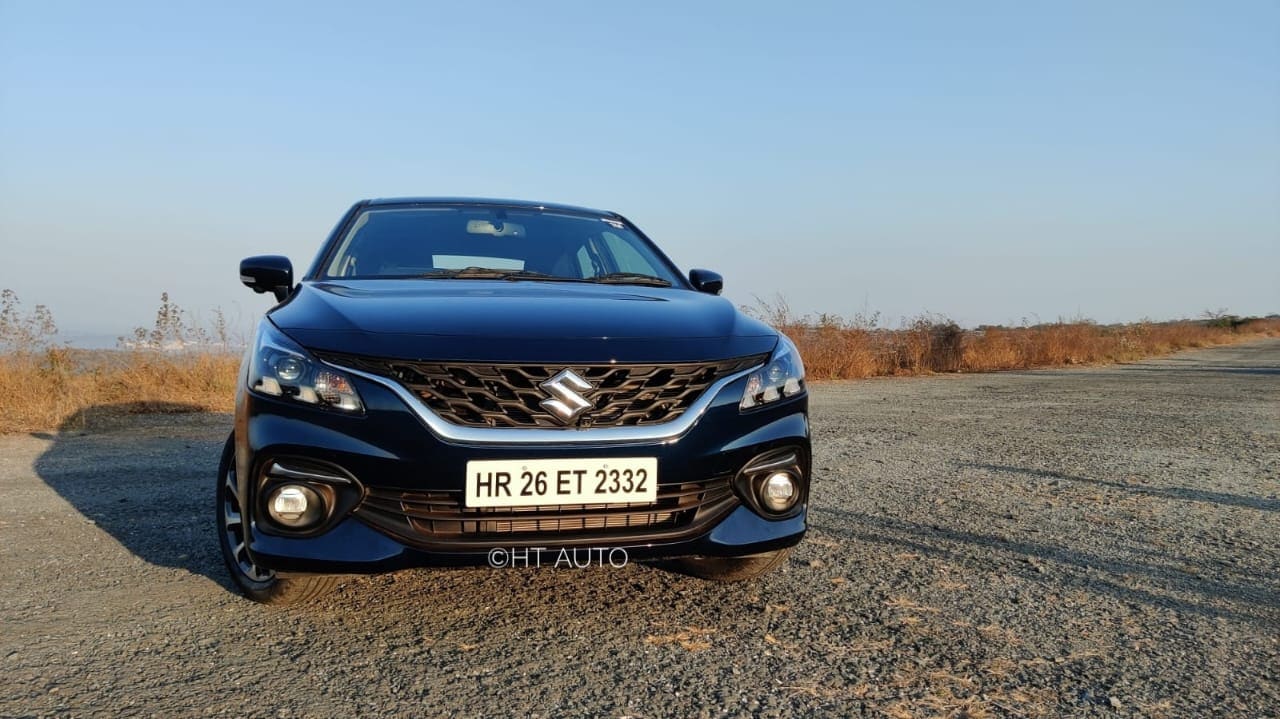 A wider front grille and sportier head lights give the Baleno a smarter face.

Over at the side, there is a new 10-spoke design for the alloys and a minor update to the character line on the body. At the rear, the C-shaped tail lights are now bigger than before and look quite catchy. 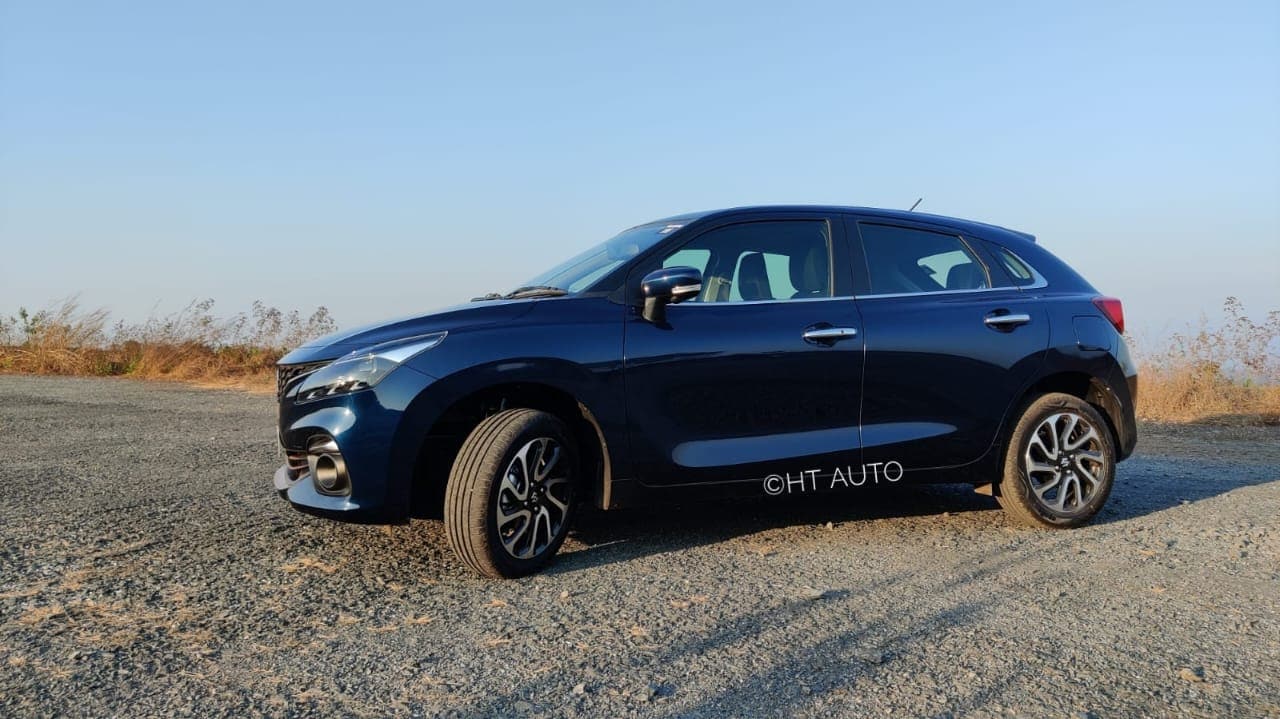 A look at the side profile of the Baleno.

Maruti Suzuki reserved its maximum time and effort to ensure that it is the cabin of the new Baleno that brags most of the updates - some radical, a few generic but mostly all combining to stamp the youthful nature of the vehicle. 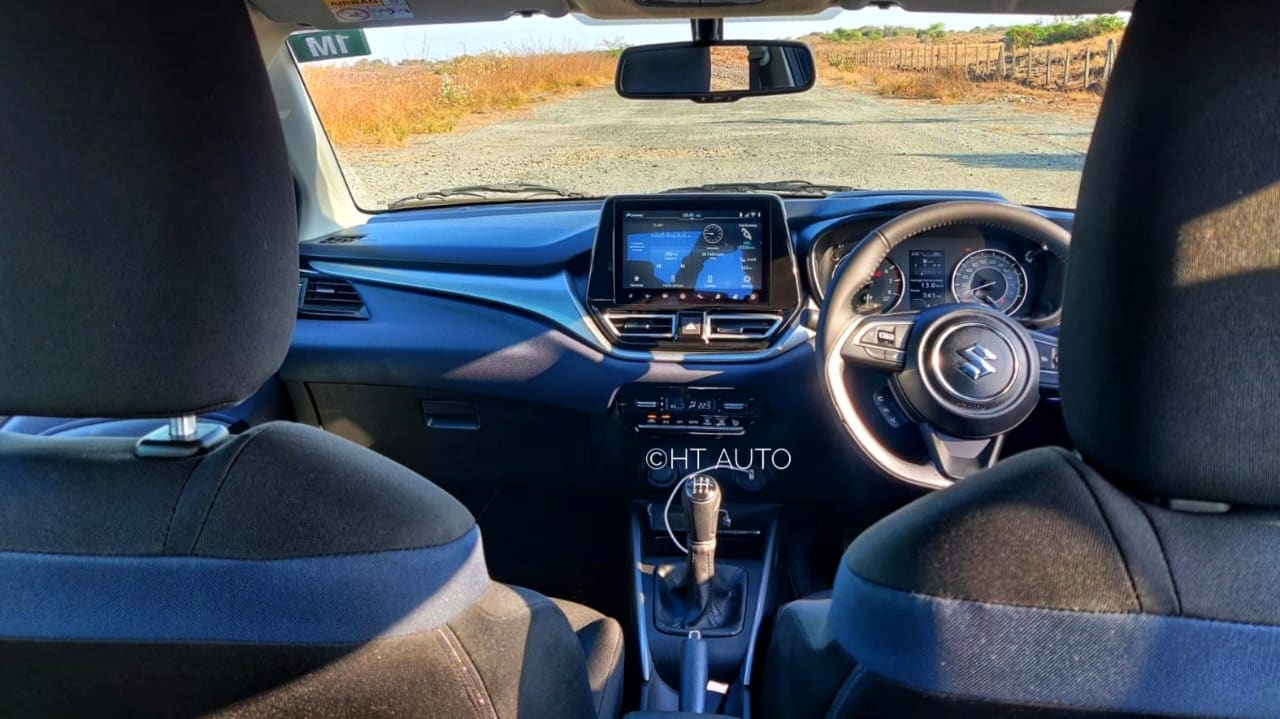 A look at the dashboard layout on the latest Maruti Suzuki Baleno.

For starters, there is a new dashboard design on the top-end variant. The stretched-out dash has an interplay of Black, Silver and Navy Blue interplay on each of its three overlapping elements. Plonked right in the center of it all is a free-standing nine-inch HD touchscreen display which Maruti refers to as SmartPlay Pro +. 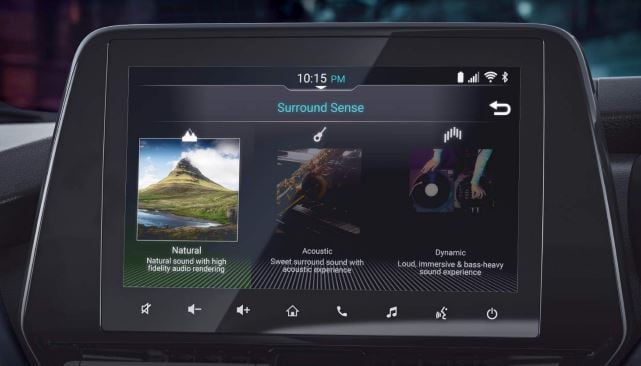 The HD touchscreen display inside the new Baleno is large and vivid, while negating sun glare.

For all those, including me, who always felt the i20 trumps Baleno in terms of features offered, Maruti has clearly heard our collective opinions. That's because this SmartPlay Pro + screen packs in a wide variety of features that include wireless support for Android Auto, Apple CarPlay and even Alexa compatibility. And if the i20 has the ‘Hi Hyundai’ voice recognition and command feature, the Baleno now has the same courtesy ‘Hi Suzuki’ courtesy Alexa voice command. In our dialogue with the vehicle, the system fared remarkably well was accurate in responding to the few queries posted to it.

Then there is a premium ARKAMYS surround sound system that also significantly ups the premium quotient of the vehicle - another sign that this hatchback continues to focus on the young car-buying audience.

But just wait right here and take a pause. For all the features mentioned thus far, it is beyond me why Maruti couldn't throw in a wireless phone charging pad as well. Sure it would have added to the production cost but would it have been by a lot? And while we are on the topic of misses, there is still no sunroof in the Baleno, something I can totally live with but a feature that is especially sought by many. 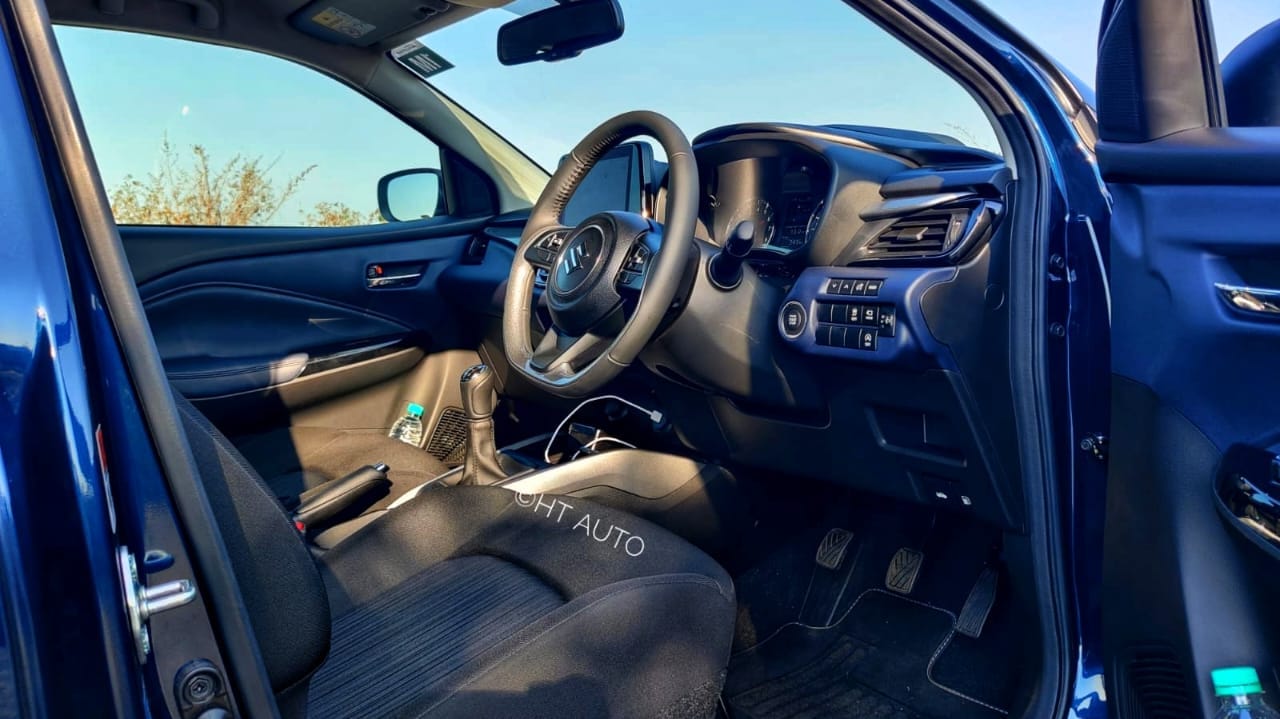 But one look at the neat pop-up Head Up Display is more than likely to leave the potential buyer impressed. At first, I assumed it may well be rather gimmicky but take my word for it, is a great safety feature to have. The button to select what information you want to see - speed, gear selected, time, among others - as well as two buttons to adjust the position of the info are located on the right, next to the steering. The pop-up HUD unit doesn't just look smart but is a great safety feature to have inside the new Baleno.

This segment-first feature alone could help Baleno score brownie points with younger buyers and may excuse the Maruti engineers for still persisting with a rather ancient, absolutely ordinary semi-digital driver display screen. 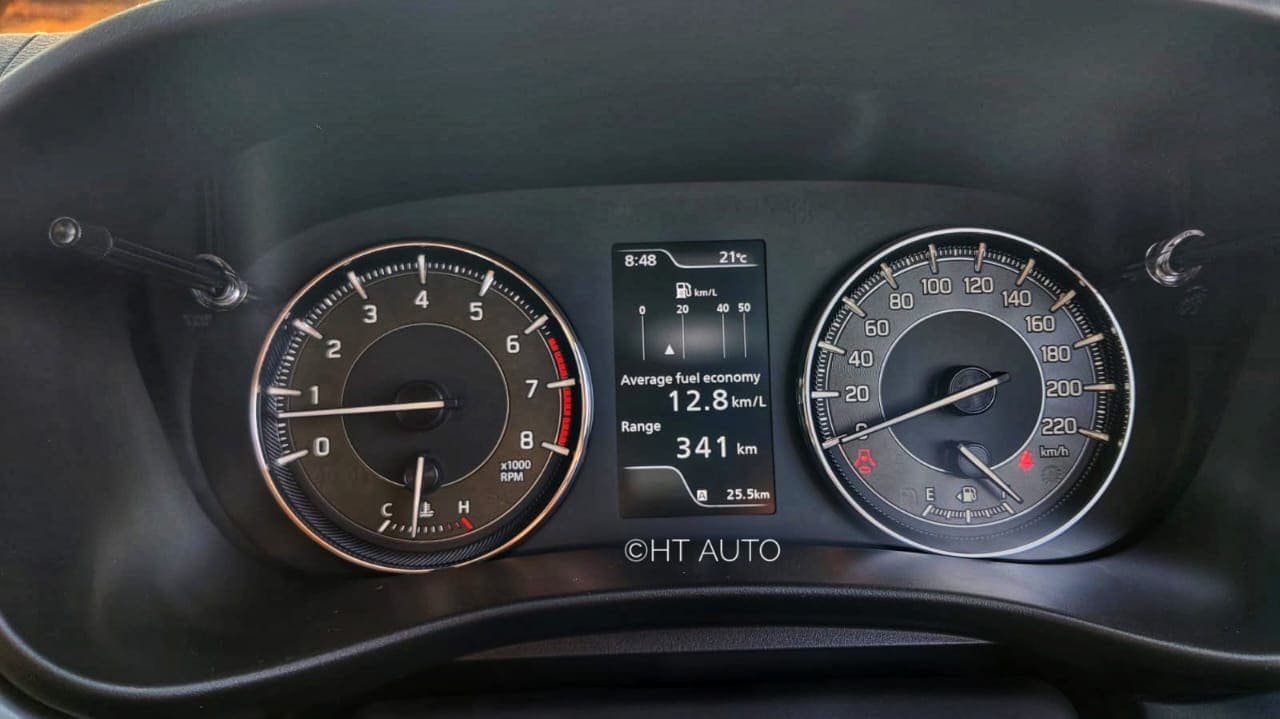 For all the updates inside the Baleno, Maruti could have upgraded the driver display from this rather mundane look.

I also particularly liked the addition of the 360-degree camera - three in the front and three at the back - with alert function. The feed comes automatically on the main display each time one starts the vehicle and also when the reverse gear is engaged. And just in case there is an object in front or back of the vehicle and beyond the visual feed, the system puts out an audio warning to alert the driver. This system is called Approaching Object Detection (AOD). Additionally, there are steering input-based guidelines to assist parking functionality.

All of these feature additions, most to the top variant of course, help the Baleno grow more teeth in the fight against its Korean and Japanese rivals. In terms of sheer space and comfort, not much has changed apart from slightly better cushioned seats. The rear-seat space remains reasonably good with decent leg and knee room. But the center console now comes with rear-AC vents and phone charging points.

The Baleno has been made available in four variants- Sigma, Delta, Zeta and Alpha. While the 1.2-litre petrol motor is common to all the four variants, the Sigma variant comes with only manual transmission while all other variants get a choice between manual and AMT.

Yes, lo and behold, no CVT any longer.

Maruti says that there are two reasons for ditching the CVT - the company wants to democratize two-pedal technology and that AMT offers better mileage. I, however, suspect it has more to do with keeping costs in check. 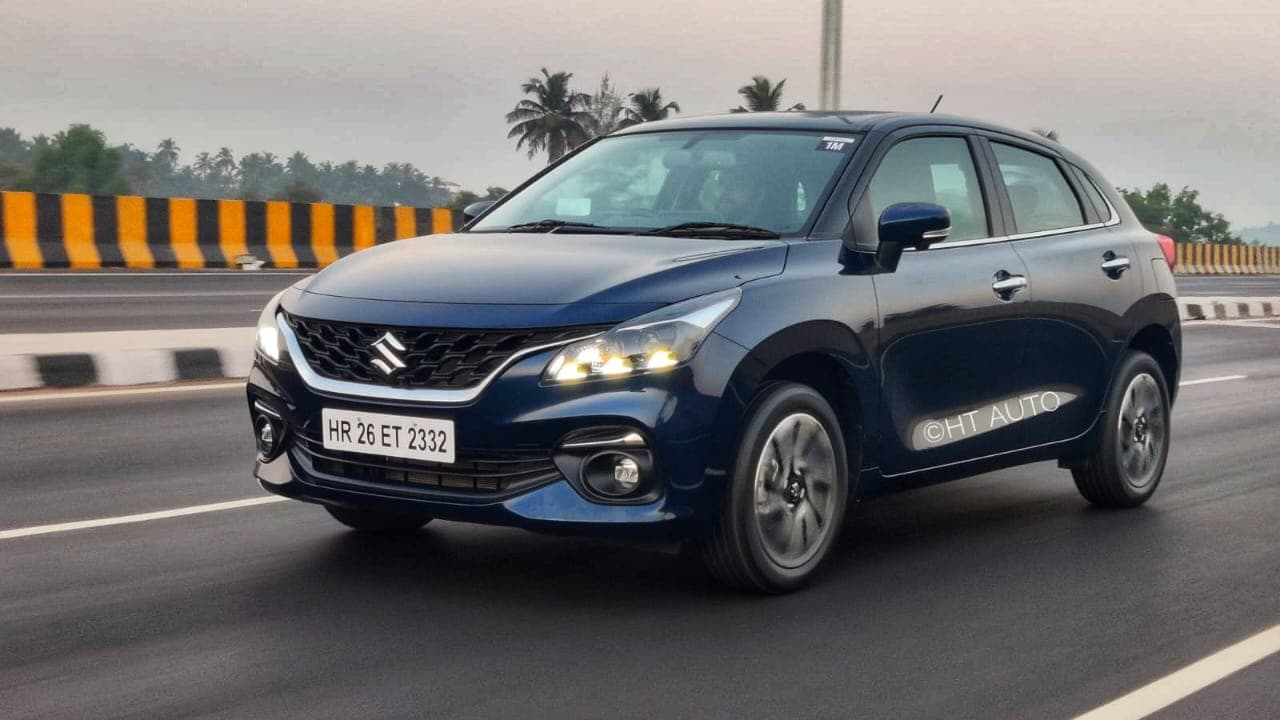 The Baleno engine puts out around 88 bhp of power and there's 113 Nm of torque.

Now it isn't as if the AMT is entirely shabby. Paired with that 1.2-litre engine, it has a predictable character and someone all-too-familiar with Maruti vehicles would be right at home. A great ambler in city traffic, the Baleno continues to offer a planted drive. The steering set up too is typically Maruti which means the hatchback holds its own well when being pushed in and out of traffic.

But push the Baleno and the AMT has that evident struggle that is also found in some of the other Maruti vehicles. This is most evident on uphill climbs and when making an overtaking move. Prepare, plan and prepare a bit more if looking to go ahead of that vehicle in front and with incoming traffic from the other lane. It is also here that I would stick my neck out and say a more powerful engine would have been absolutely great. After all, the 1.5-litre engine is being fitted on Baleno meant for markets abroad. But don't get me wrong for one bit. I do see the logic behind it all - mileage and sheer convenience, and on both these counts, the pairing between this engine and this gearbox works. 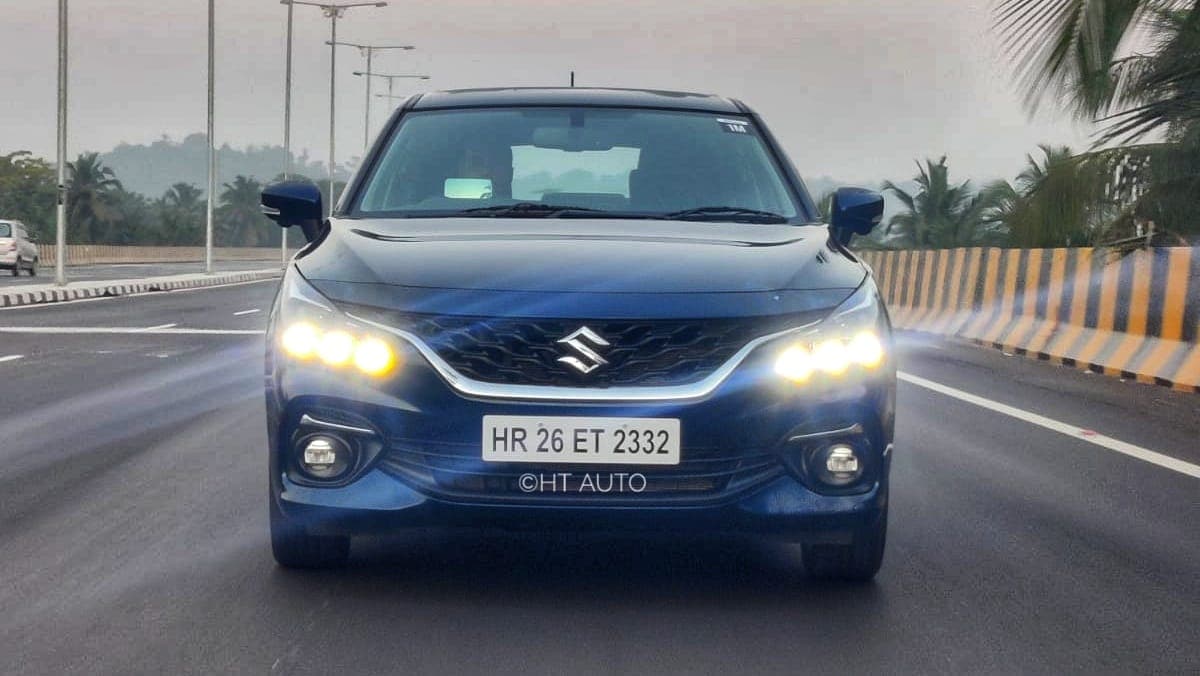 Safety features on the new Baleno include six airbags, ABS with EBD, ESP, Hill-Hold Assist, among others.

I also tried the manual gearbox and there's nothing much new to report from here. Short, crisp throws and the Baleno gets the job done regardless of traffic conditions.

Cornering at speeds, regardless of transmission choice of course, remains a bit disconcerting and there is a fair bit of body roll all around. But jump closer to triple digits and the Baleno offers decent stability and precision.

Maruti also claims that the suspension set up has been returned a bit and the now slightly stiffer set up greatly aids the Baleno's performance on broken roads. And I verified this on rigorous roads at speeds between 30 kmph and 60 kmph.

If you have been wanting to buy a Baleno for some time now, think not any more and just take the dive. A confident hatchback, the latest from Baleno also has very compelling price points.

The exterior updates and the cabin refresh does wonders to a model that is anyway a superstar in its segment. And while I will hold on to my gripe of not getting a CVT to choose from - yes, I would pay that bit extra, the Baleno ticks most boxes right and is more than likely to keep the crown embossed on its head.