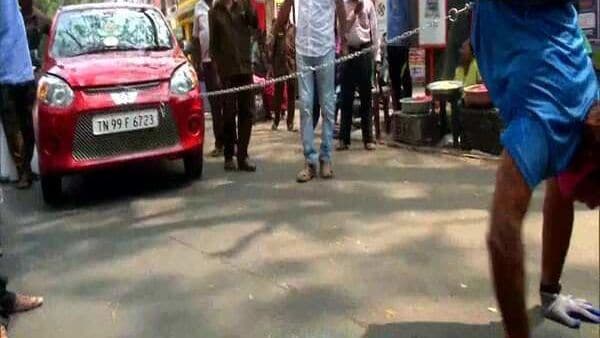 Chatrapathy pulling the car by walking upside down. (Image: ANI)

Political parties often do unique campaigns when it is about the election. So do the supporters of the political parties. In Tamil Nadu, a yoga instructor did something unique on Tuesday, when he pulled a Maruti Suzuki Alto 800 for walking upside down to campaign for All India Anna Dravida Munnetra Kazhagam (AIADMK) candidate and state Minister SP Velumani in RS Puram of Coimbatore.

Chatrapathy, the yoga instructor claimed that he did this not only for campaigning for the AIADMK candidate but to create awareness about yoga and its health benefits as well.

As the southern state is ready for the assembly election several candidates are taking unique ways to garner attention from the voters, media. This was one such unique stunt by Chatrapathy. He also claimed that he pulled the hatchback for around 800 metres with a chain tied to his waist. The Maruti Suzuki Alto 800 is the smallest car from the largest carmaker of India and its kerb weight is 755 kg.

Interestingly, pulling a car or any other vehicle by a man is not a new stunt at all. Previously as well, on several occasions, we have seen people tried to pull heavy cars, trucks, even airplanes, and ships as well, at times with teeth or with a hand or with a rope tied to the waist. There were several Guinness book records as well for such stunt performances. However, performing such stunts to campaign for an election candidate is something really unique, as we have seen in Tamil Nadu this time.

Truly, it is incredible India.