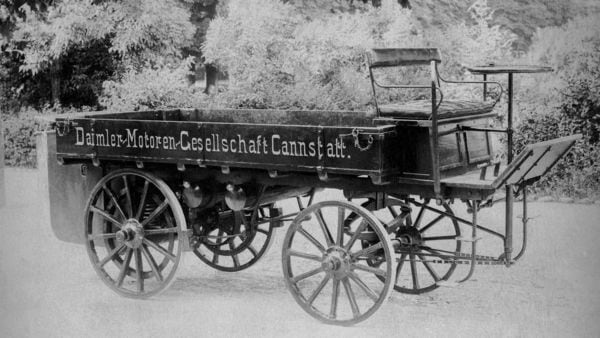 The very first cargo truck by Daimler was powered by a 1.06 litre two-cylinder engine.

Automobile giant Daimler was the first automaker to produce a truck, claims the German company. As it says, Gottlieb Daimler, who also made the first-ever internal combustion engine and ICE powered vehicle, manufactured the world’s first-ever cargo truck back in 1896.

The Daimler cargo truck was based on Gottlieb Daimler's previous developments. It was powered by a 1.06 litre two-cylinder engine. Also, the truck is claimed to had a fuel efficiency of 16.66 kmpl, which was very impressive during that era.

The very first cargo truck of the world looked like a bullock cart powered by an engine at the back and the driver at the front of the vehicle. The ICE engine onboard was capable of pumping out 4 bhp of power output, channeled to the rear wheels through a belt-driven mechanism.

The engine was very sensitive to vibrations. Hence, the engine was protected by two helical springs. The truck used to run on hard iron wheels and there was no rubber tyres wrapped around them.

As the German auto giant claims, the first-ever cargo truck's steering mechanism used a chain to steer the leaf sprung front-axle. In 1898, Gottlieb Daimler joined hands with another automobile pioneer Wilhelm Maybach to build an upgraded version of the cargo truck.

This time, the engine was relocated to the front of the vehicle, just like the current trucks. In the same year, the truck finally received its own design with a different front end. Another updated version of the truck was built shortly after with the engine in front of the front axle. This time, Daimler used a larger and more powerful 2.2-liter engine paired with a Bosch ignition system and a new cooling system as well.