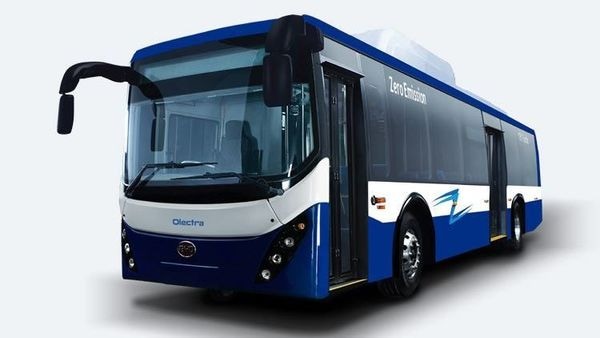 The C9 electric bus claims to be made specifically for Indian conditions.

The face of intercity travel in India is all set to undergo a massive change with electric mobility gaining pace across the country. While manufacturers of cars and two-wheelers have been either showcasing or launching their products with an electric core at heart, makers of bigger vehicles are not too far behind either and Olectra Greentech recently showcased how its C9 bus promises to emerge as a viable option for clean and cheap travel.

The C9 electric bus was launched at the ongoing Auto Expo 2020. It was unveiled by Union Minister Nitin Gadkari. The intercity bus can seat between 45 and 49 passengers and makes use of a Li-ion phosphate battery that gives it a range of up to 100 kilometers on a single charge. The battery can reportedly be charged to full in three hours.

Olectra Greentech claims that there is no compromise on space, comfort and driving capabilities inside the 12-meter long C9 bus. With a top speed of 100 kmph, it has maximum power of 360 kW (180 kW X 2 Motors) and peak torque of 3,000 Nm. The company further says that this enables the bus to perform well even in hilly terrains.

On the inside, the C9 electric bus features push-back seats, WiFi, USB chargers and has five cubic meters of luggage space.

Olectra Greentech says that the C9 electric bus would offer substantial savings to owners while also contributing to the environment due to zero emissions. "With the latest addition to our product range – C9, our first intercity electric bus, we have once again proven our strong product development capabilities. After leading the eBus deployment on intracity routes, now we have taken this initiative to the intercity routes also which will address the concerns of the distance covered by ebuses," said Naga Satyam, Executive Director – Olectra Greentech.

On the safety front, the C9 electric bus features EU standard FDSS System with TUV certification, ADAS System (Driver Fatigue System) and ITS System. There is also a Panic Alarm System and Emergency lighting system in case of an accident and a defroster has been fitted on the bus to increase visibility in cold and foggy conditions.